After a primary partition has been created, you need to define the format in which a filesystem should be created on that partition, its size, and the mount point for that filesystem. Linux and Unix use the definition of mount points in the same way that Windows uses drive letters. The advantage with Linux is that the whole system is hierarchical in nature, and therefore access to data on disks, network drives, and partitions can be kept under one manageable tree structure.

The first partition you need to create is the swap partition. Most modern operating systems use swap partitions, also referred to as swap space, to support virtual memory. Virtual memory is a technique for enabling a system to use more memory than is physically available to the operating system. Processes on the system that are inactive or are waiting for input are copied from physical memory into swap space, known as swapping out a process. At this point, the physical memory associated with those processes can be reused by the operating system. When the process can run again, such as when input is available, it is copied from the swap space back into memory and continues execution. This is known as swapping in a process. The way in which processes are swapped in and out of memory is simple in theory, but is triggered by a number of internal metrics that are maintained and constantly updated by the kernel.

You should always create a swap partition on a Linux or Unix machine as the workload on any system can never be fully quantified beforehand and running out of physical memory without swap space causes processes to crash or be unable to execute in the first place.

The window to create a filesystem/partition can be quite daunting for new users (see Figure 1-12). SUSE Linux enterprise and the other distributions try to make the process as simple and usable as possible. Selecting the format of the filesystem is primarily a concern when creating data partitions or for advanced users, as discussed in the next section. When creating a swap partition, you must select Swap as its format. You will notice that the mount point will also change to be swap because the swap partition is not mounted like a data partition but is used internally by the Linux system. 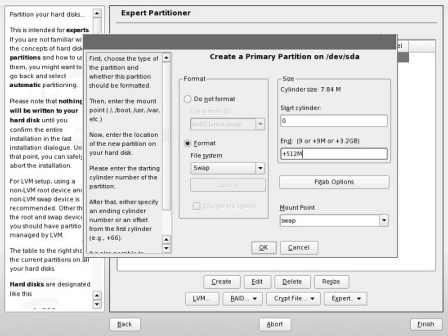 Start and end cylinders are often new concepts to new Linux users who are used to data sizes being defined in mega- and gigabytes. YaST enables you to enter the size of a partition in human readable form, such as MB and GB. The start cylinder, as this is the first partition on the disk, is 0 (the start of the usable space on the disk), and the end cylinder is what we need to change. It is usually customary to select a swap size that is 1.5 times the amount of physical RAM in the system, but this is subject to much conjecture. A reasonable swap size should be considered based on the workload of the machine you will be using, and as most modern PC systems have at least 512MB, it is safe to use the standard 1.5 times physical memory. To specify that you want the swap partition to be 750MB, enter +750M in the End cylinder entry box. The + signifies that you want to add space, the number is the unit of space needed, and the M specifies that the amount of data is expressed in megabytes. You can also specify G for gigabytes, which you will be using in the following example of creating a root partition.

After entering the size of your new swap partition, click OK to proceed.

At a bare minimum, the filesystems that need to be created are the swap space and a root (/) filesystem. However, for ease of use and manageability, the creation of a /home partition can help keep your personal data separate from the system partition and also enable you to keep your data in the unlikely event that you want to do a total reinstall of Linux. See the section on "Data Partitions" later in this chapter for more information.

In this example you are creating the bare minimum, the swap and root partitions.

The above tip is excerpted from from Chapter 1, "Installing SUSE 10" our original excerpt of The SUSE Linux 10 Bible by Justin Davies, courtesy of Wiley Publishing. This chapter explains how to successfully install SUSE Linux 10 on your box. Find it helpful? Buy it on Amazon.