With the impending release of Windows Vista comes the opportunity to reevaluate and reconfigure systems to better meet your clients' needs. In the process you'll also discover a lot of misinformation around the Internet and blogosphere about the optimum Windows Vista machine configuration; I've seen and heard most everything. Having lived through many builds of Vista on a few different machines and seen the performance impact various components had on those systems, I'm in a reasonable position to let you know what works, what doesn't and where it's not worth being cheap.

A substantial amount of changes to the Vista user experience appear in its new UI theme called Windows Vista Aero or Aero Glass, as you may know it. Aero Glass is more processor-intensive than previous themes, such as the Windows XP default theme. Glass supports new features like transparency, 3D switching of open windows, full-motion video in thumbnails and other niceties. There are many myths, however, about exactly how demanding the new theme is. Rumor mongers enjoy maligning Aero Glass as a complete resource hog requiring a fancy video adapter to run it. That's simply not true.

So what is an appropriate video card? The key to is knowing your audience for a particular system build: Are you aiming to penetrate the business desktop sector? If so, any video adapter with 128 MB of VRAM will be more than adequate to handle the graphics demand of Aero Glass. In fact, most integrated video chips have no problem handling basic displays of business documents in full Glass mode. If you're targeting your systems more toward the gamer segment, or some overlap in between, you may want to consider including a dedicated graphics adapter with 256 MB of VRAM or so, and perhaps an advanced graphics processor on board.

The old adage is true: You really can't have too much memory. As the channel gets reasonably priced hardware that supports at least 4 GB of RAM, there seems little reason to skimp on the amount of RAM that goes into a new machine. RAM is fairly inexpensive, at least at the time of this writing (fall of 2006), and Windows Vista can essentially use everything you throw at it.

Some guidelines for memory sizes: For a quality experience with Vista, you should consider 512 MB as an absolute minimum for a value system to have acceptable performance. It's of course possible to get away with 256 MB, but the amount of disk swapping coupled with the fact that most systems with such minimal RAM often share some of that RAM with an onboard video adapter means that in the end, the users of that machine will be frustrated with lackluster performance. Consider 1GB for a mainstream system, which is the real sweet spot, and 2 to 4 GB for performance-oriented machines that run lots of games, virtual machines or other intensive software applications.

One scorecard: The System Performance Rating

Microsoft has provided a great yardstick by which to measure performance with the System Performance Rating, a new feature of Windows Vista. On our blog Windows Vista: Beyond the Manual, my colleague Tony Campbell points out that the system performance rating is a "numerical value calculated by an application called Windows System Assessment Tool (WinSAT), which collects information from five key hardware areas, scoring each against the following capabilities: processor, memory (RAM), primary hard disk, graphics and gaming graphics."

If you played with builds of Vista prior to RC1, you may have had issues with the performance rating results. The Vista team has been fine tuning the tool over the past several months and it now appears to be well calibrated. In the figure below, you can see the results of the System Performance Rating on my primary system (on a scale of 1.0 to 5.9). 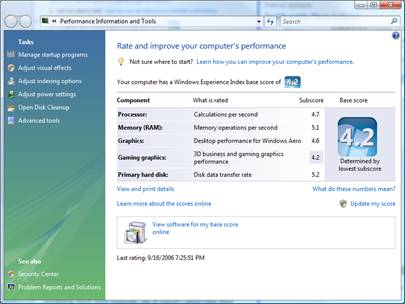 A quick rule of thumb: Systems scoring above a 3.0 run Vista acceptably well. A system above a 3.5 is pleasant to use, and a system above 4.0 appears pretty fast to the user. Consider testing Windows Vista on various hardware configurations you want to offer to customers and run the System Performance Rating test on them to see how they fare.

About the author: Jonathan Hassell is an author, consultant and speaker residing in Charlotte, North Carolina. Jonathan's books include RADIUS, Learning Windows Server 2003, Hardening Windows and most recently Windows Vista: Beyond the Manual. His work is seen regularly in popular periodicals such as Windows IT Pro Magazine, SecurityFocus, PC Pro and Microsoft TechNet Magazine. He speaks around the world on topics including Windows administration, networking and security.

Dig Deeper on Managing mobile devices in the enterprise