The VMware vSphere standard switch (vSwitch) is your basic "network virtualization" switch. Most of the features were required to connect the virtual machines to the virtual host and physical NIC cards so that they all have network connectivity.

The standard vSwitch will offer your customers:

Certainly, this appears to be a lengthy list of features, and the main downside to the standard vSwitch may not be realized until a company has two or more ESX Servers. I am referring to the fact that each of these vSwitches is tied to a particular ESX Server and each vSwitch is managed individually. In other words, managing standard vSwitches one by one isn't a problem when you have fewer than five. However, say that you have 10 ESX Servers, each with at least one standard vSwitch. If you wanted to change a security policy or traffic shaping configuration across all vSwitches, you would have to do it at least 10 times. Suddenly, paying more to be able to manage all vSwitches as a single, large, distributed switch becomes an investment that is worthwhile.

As I mentioned above, to gain access to the vSphere distributed virtual switch (also called a vDS, or vNetwork Distributed Switch), you must have a license for vSphere Enterprise Plus Edition. From there, you can take advantage of the following features:

In my opinion, the two most important features that are really going to sell the vDS are:

So how do you help customers move to upgrade? 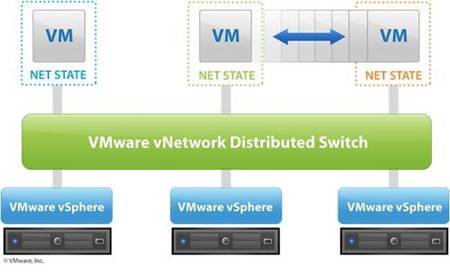 Help customers make the upgrade to the distributed virtual switch

Resellers are in the business of selling solutions. To do that, they have to help the customer see the value. In the past, there were many IT organizations that were willing to pay for the best of the best. Today, more and more, IT organizations are being squeezed to get the most for their money.

In all honesty, the way that the vSphere editions are packaged, the distributed switch may not be the primary reason that they upgrade to a higher version of vSphere. Before we talk about that, here are some questions you should ask your customers:

If your customers answered "yes" to any of these questions, the distributed switch is a need for their organizations.

As I mentioned before, it probably isn't just one feature (the distributed switch) that is going to drive them to upgrade to the highest vSphere Edition (Enterprise Plus). Most likely, it will be other features, such as:

In my opinion, the combination of features like these plus the vNetwork distributed switch will be enough to help most companies justify the additional cost of upgrading to vSphere's Enterprise Plus edition.

As a reseller, you need to be educated not only about the differences in these "virtual offerings" but about why enterprises would want to move up to the highest version of the vSphere suite in order to get this added functionality. While the distributed virtual switch is an awesome feature, I believe it will be the combination of all the features added in vSphere Enterprise Plus that will push customers to spend the additional cost for the "top of the line" virtualization offer available today.

David Davis is Director of Infrastructure at TrainSignal.com -- the global leader in video training for IT pros. He has a number of certifications, including vExpert, VCP, CISSP and CCIE #9369. David has also authored hundreds of articles and six video training courses at Train Signal, with his most popular course being the VMware vSphere 4 video training course. His personal website is VMwareVideos.com. You can follow David on Twitter or connect with David on LinkedIn.

How well do you know vSphere Distributed Switches?