Every day, solution providers are put in the unenviable position of trying to please the various silos of control that make up today's IT departments. The server infrastructure group manages the servers, the network infrastructure group manages the network devices, and so on. Until recently, these groups had relatively clear fiefdoms to rule, and they were relatively happy about it. Then came virtualization.

As virtualization software has evolved, end users have complained about the lack of delegation possible in the management software and the lack of features built into virtual networking. The portability of virtual machines allows them to move from server to server using VMware's VMotion, which is, in turn, used by VMHA, DRS and DPM. This further aggravates the problems for network managers because these virtual machines aren't always connected to the same virtual switch or on the same physical server. To help out both groups, VMware, Cisco and other companies have responded.

How vSphere 4 helps to solve these problems

With VMware vSphere 4 Enterprise Plus, VMware now offers the Distributed Virtual Switch (dvswitch) or vNetwork Distributed Switch (vDS). Also in vSphere 4, VMware admins can create network administrator roles and delegate permissions to the virtual networks and the new distributed virtual switch port groups. With this new advanced switching option available in vSphere 4, these virtual switches can connect VMs not just on a single ESX server but across multiple ESX servers and can then be administered as if they were connected to a single switch. Among other very beneficial features, the distributed switch also offers the ability to use a third-party switch instead. This is where these benefits really start paying off for network administrators.

Upgrading to the Cisco Nexus 1000V

Today, the only third-party switch appropriate for this situation is the Cisco Nexus 1000V. Unlike other Cisco switches, the 1000V is a software switch that integrates with vSphere 4 (Enterprise Plus Edition).

Above and beyond the purchase of VMware Enterprise Plus, you must purchase the Cisco Nexus 1000V license for each vSphere server. The VMware licenses are likely to come from the server manager's budget; the Cisco Nexus license is likely to come from the network manager's budget. This is also true because the Nexus 1000V may be much more than the typical server admin needs or even wants to understand. However, the 1000V is the solution that network managers have been looking for. Here are a few reasons why:

The 1000V is made up of two pieces -- the VSM (virtual supervisor module) and the VEM (virtual Ethernet module). The VSM is actually a virtual appliance running on an ESX server. The VSM is where you connect and gain access to the Cisco IOS prompt in order to manage the VEMs that are connected to each virtual server (see Figure 2, below). 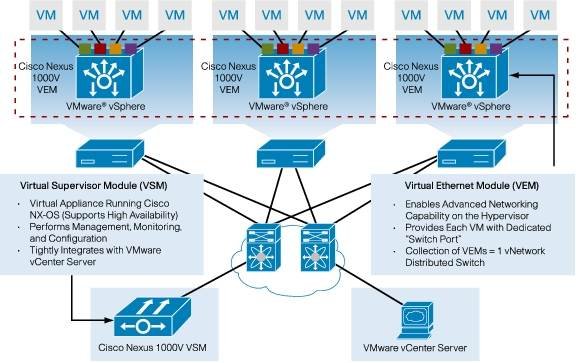 Pros and cons of the Cisco Nexus 1000V

I just covered some of the benefits of the Nexus 1000V. Now let me break the 1000V down into its pros and cons:

How can solution providers help?

As a solution provider, you are going to have the most success by making "everyone happy." While this is always difficult, the Cisco Nexus 1000V is a solution that can help you do it.

Virtualization is becoming more and more of a "savior" to overworked server managers who need options to allow them to do more in less time. It can also help rescue the IT budget by consolidating physical servers into virtual servers (P2V), thus saving money. However, virtualization hasn't been much help to network managers in the past. Sure, it has helped them save money by reducing the number of switch ports that are required, but it has also taken away much of the control and many of the features that they are used to using.

In my opinion, the Cisco Nexus 1000V steps in to solve these problems. Certainly, it is going to cost you, but that cost is small compared with the per port switch cost of an enterprise-ready network switch. And the 1000V is going to bring the Cisco IOS command line and features to network managers who badly need to regain the network features and control that they have lost (or soon will lose).

In fact, I was so impressed by the Cisco Nexus-1000V that I was one of the judges who selected it as the Best of VMworld 2008.

For more information on the 1000V, visit the Cisco Nexus 1000V product page.

David Davis is Director of Infrastructure at TrainSignal.com, the global leader in video training for IT pros. He has a number of certifications, including vExpert, VCP, CISSP and CCIE #9369. In addition, David has authored hundreds of articles and six video training courses at Train Signal, with his most popular course being the VMware vSphere 4 video training course. His personal website is VMwareVideos.com. You can follow David on Twitter or connect with David on LinkedIn.