How often have you sold a piece of software, only to have to troubleshoot why it won't work with your client's Windows XP firewall? The solution to this problem is simple enough: just open the firewall port used by the application. The trick is in knowing which port to open. This generally isn't a problem if the application uses a well-known port, but many applications rely on obscure, proprietary ports. With over 65,000 TCP and UDP ports each to choose from, guessing the correct port isn't an option. Fortunately, you don't have to. There is a little-known trick using Netstat that can help you identify which firewall port an application uses.

I could easily write an entire article on the syntax for the command-line tool Netstat, but for the purposes of this tip, I'll only discuss the switches needed to determine which firewall ports an application uses. If you want to learn more about other available switches, just enter NETSTAT /? at the command prompt. You can also view the Netstat documentation on Microsoft's Windows XP Professional documentation site.

Depending on how many processes are running, the command's output can be too long to fit on a single screen. Therefore, for the purposes of Windows XP firewall troubleshooting, it's a good idea to redirect the output to a file. You can accomplish this by appending a greater-than sign (>) and a file name to the end of the command. For example, the following command redirects the output to a file named C:\NETSTAT.TXT:

Figure A, below, illustrates the command in action, as well as the contents of the NETSTAT.TXT file. Keep in mind that the file's contents will be different on every PC and that in order for the file to be of any use, you must be running the application for which you need the port number while you run this command. 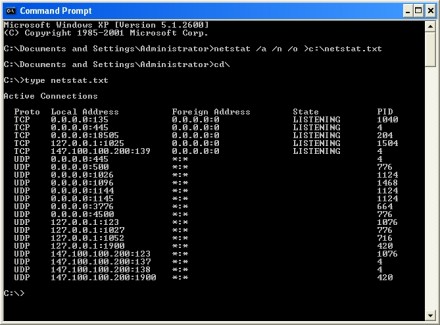 Figure A: The Netstat command can be used to determine which firewall ports are in use.

Looking at this output, you may notice that Netstat doesn't list any applications. Even so, the last column lists the process ID (PID) of the application that's using the port. To determine which application uses the port, you must match the applications with their PID numbers. To do so, select CTRL+ALT+DELETE to open the Windows Task Manager, and then click the Processes tab. As shown in Figure B, this tab lists the various processes in use, but it does not list the corresponding PID numbers. 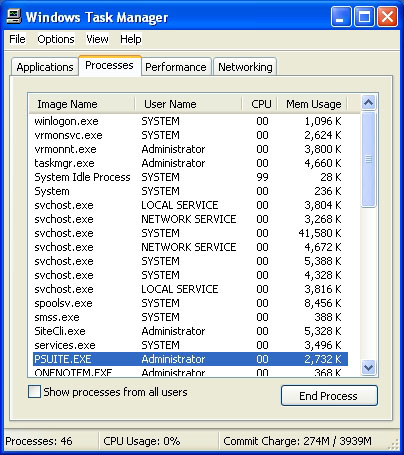 Figure B: By default the Windows Task Manager lists processes but not process numbers. 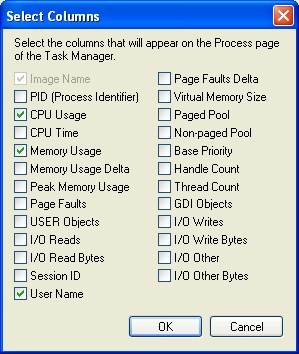 Figure C: Select the PID checkbox, and then click OK. 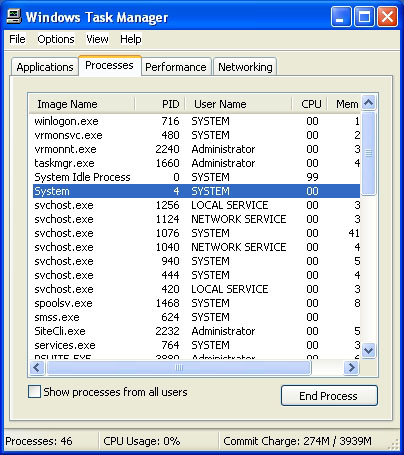 Figure D: The PID column tells you which process ID has been assigned to the process.

You should be able to use this technique to determine which port an application is using. Keep in mind, though, that Windows may run different processes under different user accounts. Therefore, if you don't see your target process listed, you may have to select the Task Manager's Show Processes From All Users checkbox.

About the author
Brien M. Posey, MCSE, is a Microsoft Most Valuable Professional for his work with Windows 2000 Server and IIS. Brien has served as CIO for a nationwide chain of hospitals and was once in charge of IT security for Fort Knox. As a freelance technical writer he has written for Microsoft, CNET, ZDNet, TechTarget, MSD2D, Relevant Technologies and other technology companies. You can visit Brien's personal Web site at www.brienposey.com.