The Storage magazine/ SearchStorage.com Quality Awards recognize products that, through  their use, have shown dependability and quality. To arrive at the results, qualified Storage/SearchStorage.com readers were surveyed and asked to assess products in five major categories: sales-force competence, product features, initial product quality, product reliability and technical support. These products are evaluated on a scale of 1.00-8.00, with 8.00 being the most favorable score. In this sixth edition of the Quality Awards for NAS systems, 206 of those surveyed responded, rating 389 products/product lines.

The profile of file storage in the data center continues to grow, with storage infrastructure efforts increasingly directed toward “big data” and efforts to address the growth of end-user information. Fortunately, storage vendors are willing to step up to the challenge, with customers on the whole responding favorably about their products on Storage magazine’s sixth Quality Awards for network-attached storage (NAS).

According to the survey results, Oracle Corp. storage users are the most satisfied NAS users. These products received high scores in the service and reliability categories, pushing Oracle storage  to the top of the rankings among enterprise and midrange NAS systems. Over our six NAS Quality Awards surveys, six enterprise storage vendors and three midrange vendors of NAS products have received the top ratings since NetApp Inc.’s initial domination of the first three Awards. This year, the survey showed that the average ratings for both groups have set new highs in all but two of the categories.

Look below for a list of the products that were included in the Quality Awards for NAS survey. The number of responses for each finalist can be found in parentheses following the product name. 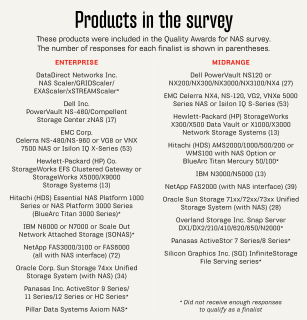 Enlarge the "Products in the survey" chart 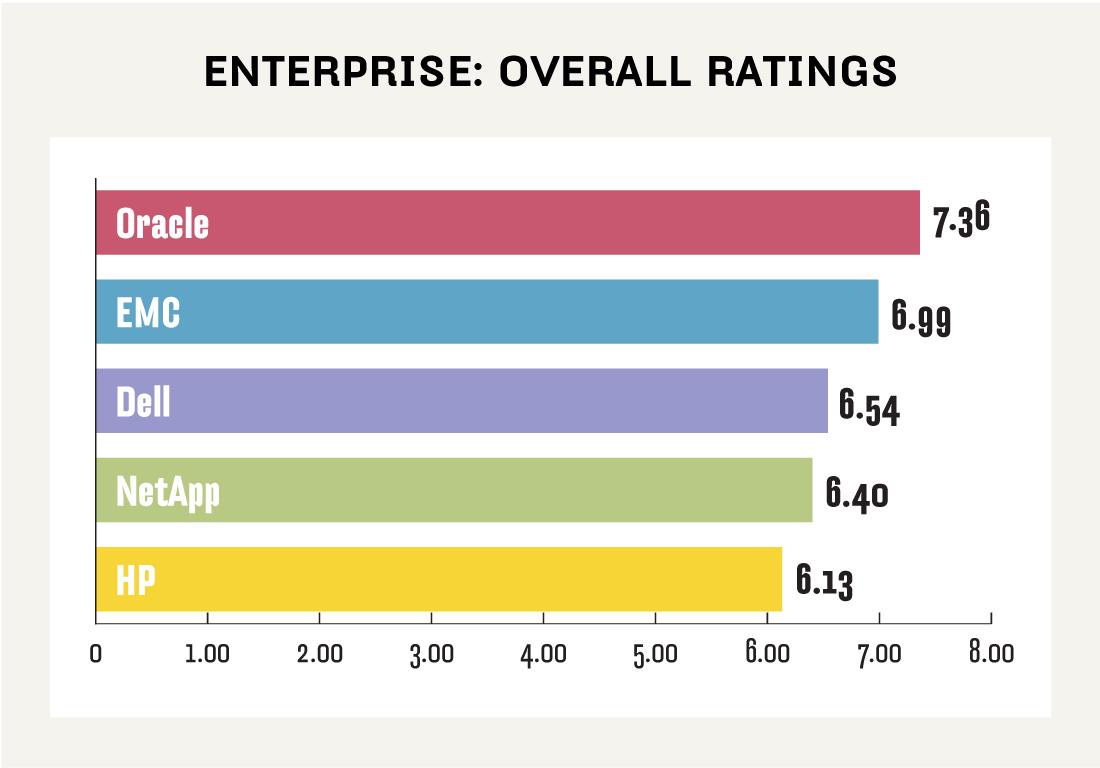 Enterprise. Oracle’s 7.36 is the highest overall score we’ve seen in all the NAS Quality Awards surveys. EMC Corp. set the record in the previous survey, but Oracle bested that mark by more than half a point. Oracle set the record by earning the highest marks in all five ratings categories, with an unprecedented score of more than 7.00 in each category. EMC’s showing was nearly as impressive, finishing with a 6.99 overall score, which would have easily won any previous NAS survey.

Oracle’s ratings were strong across all categories, with its highest marks coming for its sales efforts, product feature sets, and relatively quick and painless deployments. EMC was also a strong challenger in all five categories, posting sterling scores that included two 7.00-plus ratings, with the other three coming in at 6.92 to 6.98. The other vendors also fared well, with Dell Inc. posting a very respectable 6.54 to finish third, followed by NetApp (6.40) and Hewlett-Packard Co. (6.13). 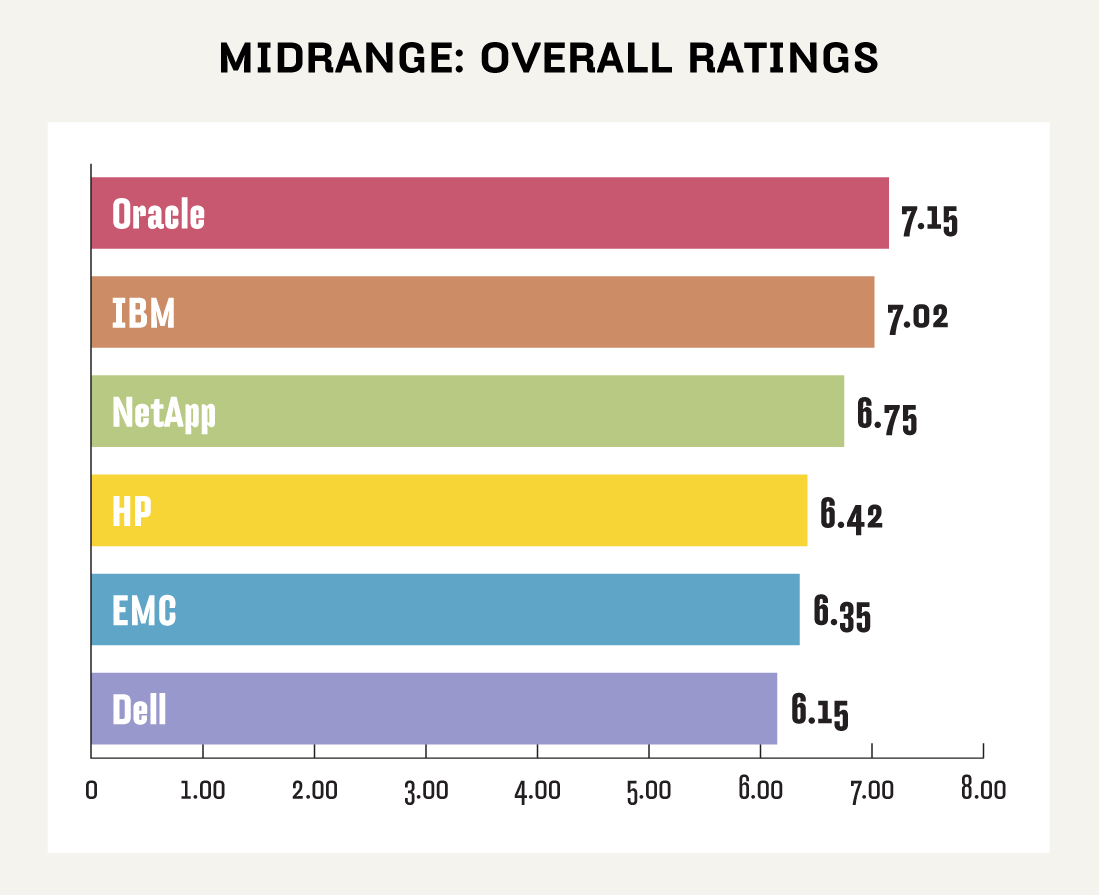 Midrange. In winning the midrange group, Oracle didn’t set a new overall score record, but it did manage to tie the best overall mark, a 7.15 set by IBM on the last survey. IBM couldn’t quite repeat its record-setting performance, but it earned a 7.02 to finish second -- only the third 7.00-plus overall score ever among midrange NAS.

Oracle and IBM battled through the five rating categories, with Oracle prevailing on four and IBM finishing first for sales-force competence. IBM came in second for three categories and third in the final one. NetApp’s solid 6.75 was good for an overall third place, followed by HP (6.42), EMC (6.35) and Dell (6.15). 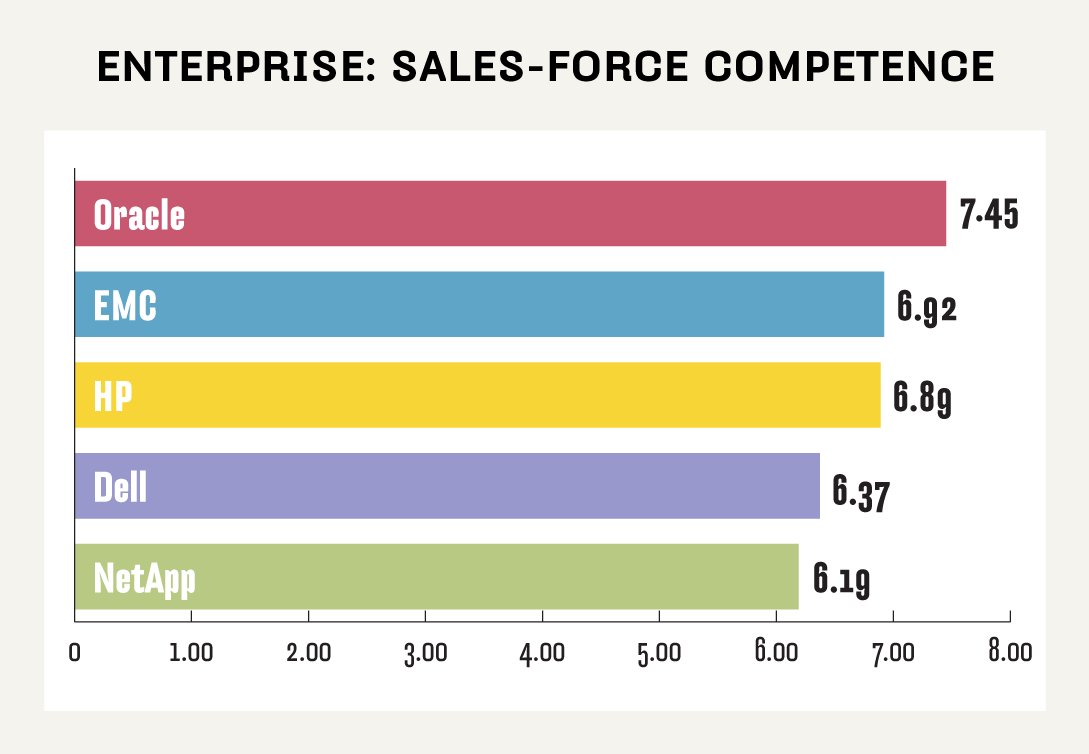 Enterprise. Across all the NAS Quality Awards surveys, no vendor had ever cracked the 7.00 mark for the sales-force competence rating category, but this time Oracle plowed right through that barrier and didn’t stop until it reached 7.45. That astounding score was earned based on statement scores ranging from 7.32 to 7.56, with Oracle’s highest ratings coming for keeping its customers’ interests foremost, being knowledgeable about its customers’ industries and being flexible. EMC’s 6.92 in the category put it comfortably in second, just ahead of HP (6.89). 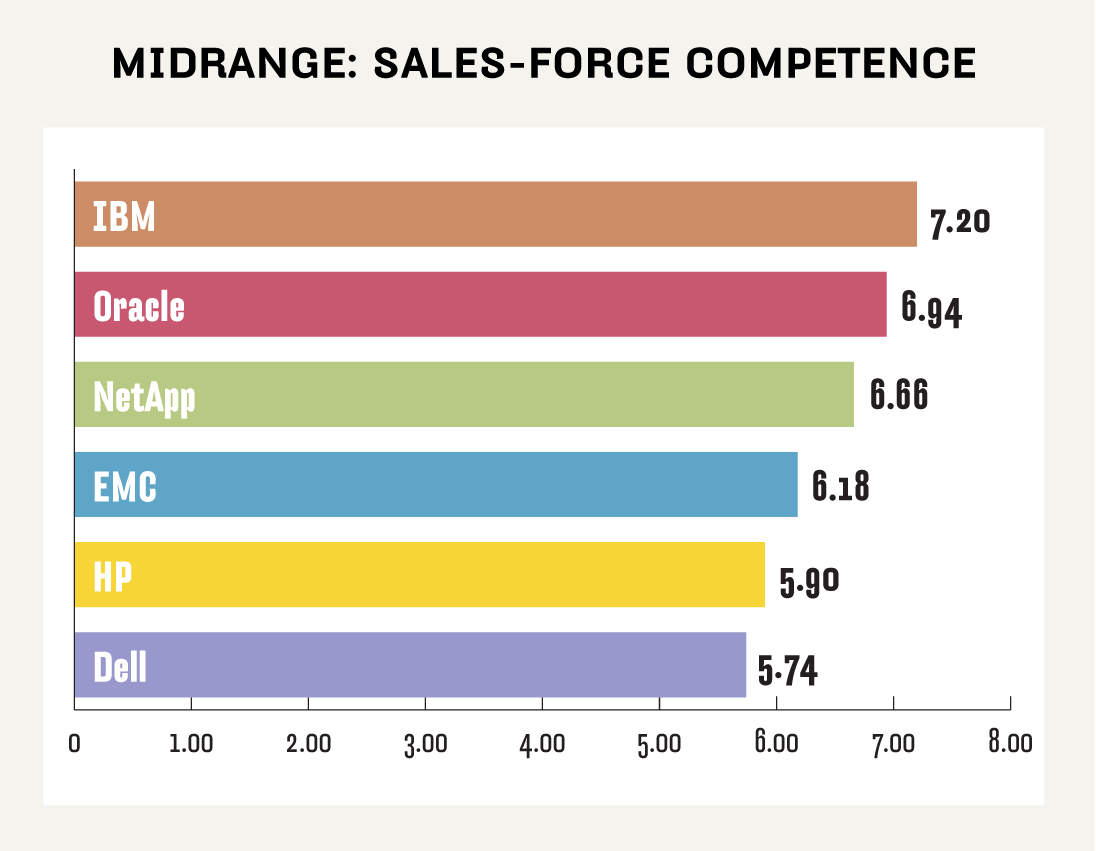 Midrange. IBM scored approximately 7.00 for all sales-force competence statements to finish with a winning 7.20 average, which was high enough to put it well ahead of second-place finisher Oracle (6.94).

NetApp posted very consistent scores, ranging from 6.38 to 6.89, across the six category statements for a laudable third-place average of 6.66. 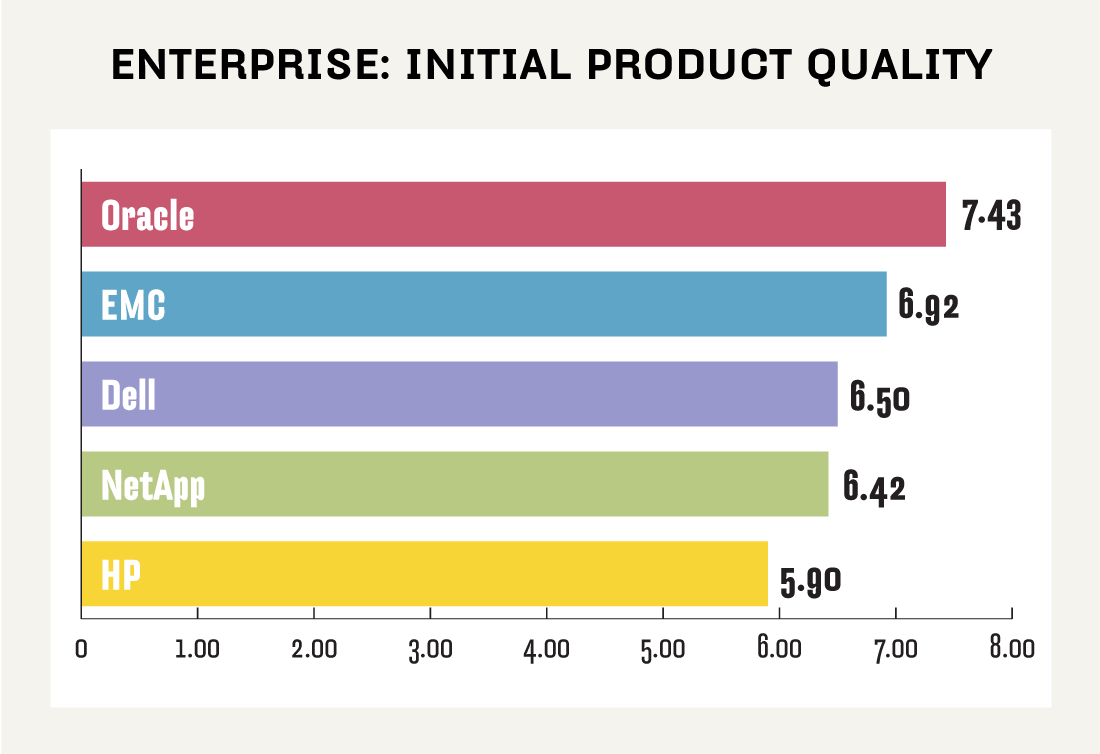 Enterprise. Oracle posted one of its top category averages (7.43) to take initial product quality honors. In doing so, Oracle showed remarkable consistency, with scores ranging from 7.38 to 7.44 on the six statements in this category, including four 7.44 ratings. EMC didn’t threaten Oracle’s dominance, but its second-place category average of 6.92 is the second highest ever recorded. Dell was a distant third with a still-strong 6.50 score. 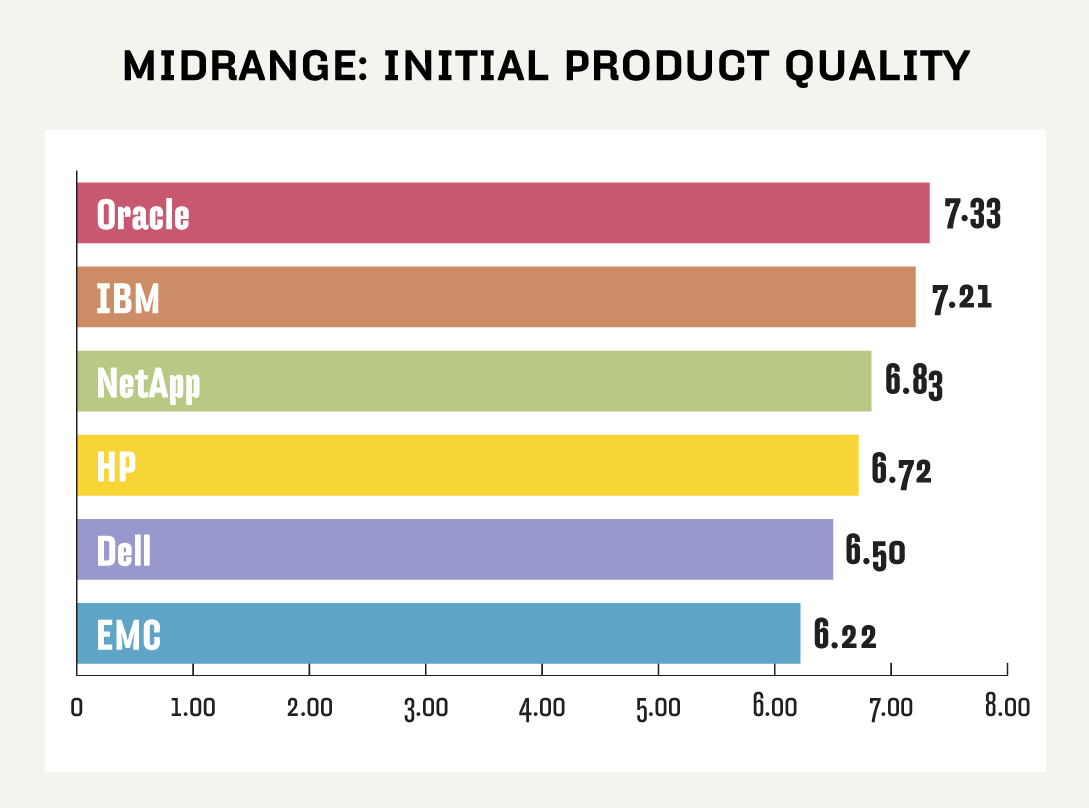 Midrange. IBM gave Oracle a run for its money in the midrange initial product quality category, ultimately finishing second with a notable 7.21 to Oracle’s 7.33. IBM topped Oracle on three of the six statements, but was somewhat undone by the “good value for the money” statement when it scored a 6.69 to Oracle’s 7.39. NetApp had two above-7.00 statement scores for an overall 6.83 for third, while HP had a single 7.00 on its way to a category average of 6.72. 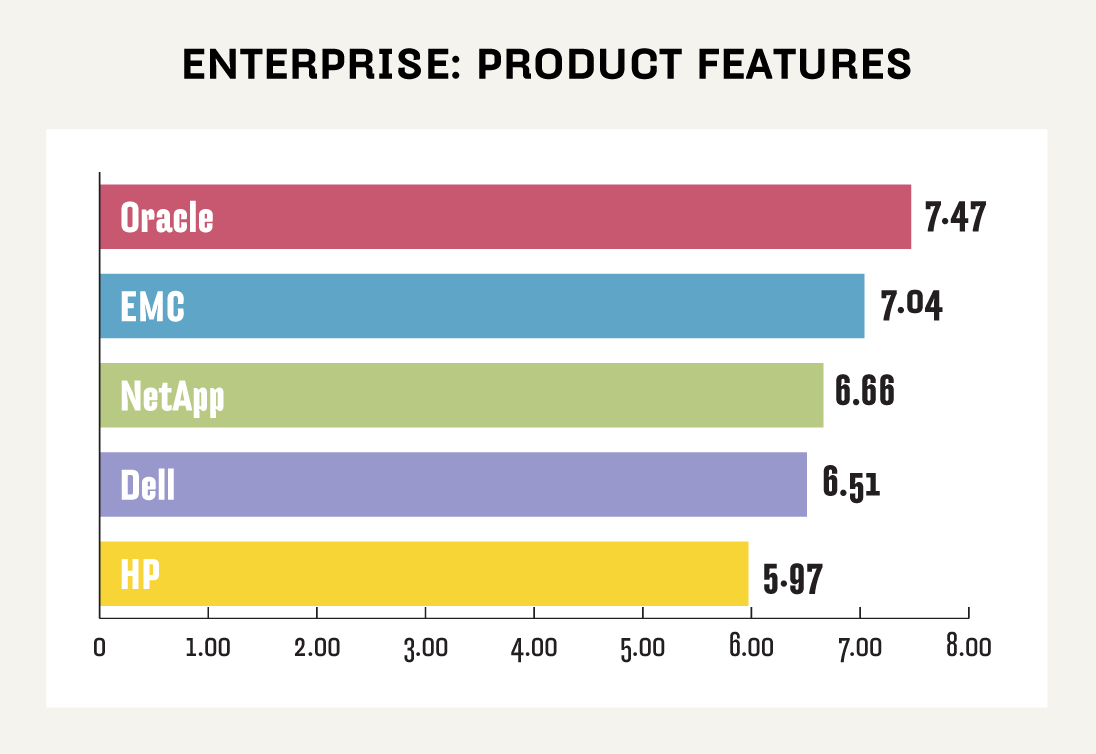 Enterprise. Even after a good sales experience and a problem-free implementation, it still comes down to what the system can do. Apparently, Oracle users are happy enough with their systems’ capabilities to help earn the vendor a 7.47 score for features. That’s the highest-ever score for enterprise NAS, and it helped build an overall group average for the product features category that was also a record breaker. EMC finished second with a 7.04, the second-best score ever and enough to have prevailed in previous surveys.

Midrange. IBM racked up three statement scores of more than 7.00 to earn a category average of 6.99, but couldn’t overtake Oracle’s six 7.00-plus tallies and 7.24 category score. System capabilities don’t seem to be a concern among midrange NAS products, as all vendors fared well in this category.

The overall category average was 6.66, enough to edge out the last survey’s average. 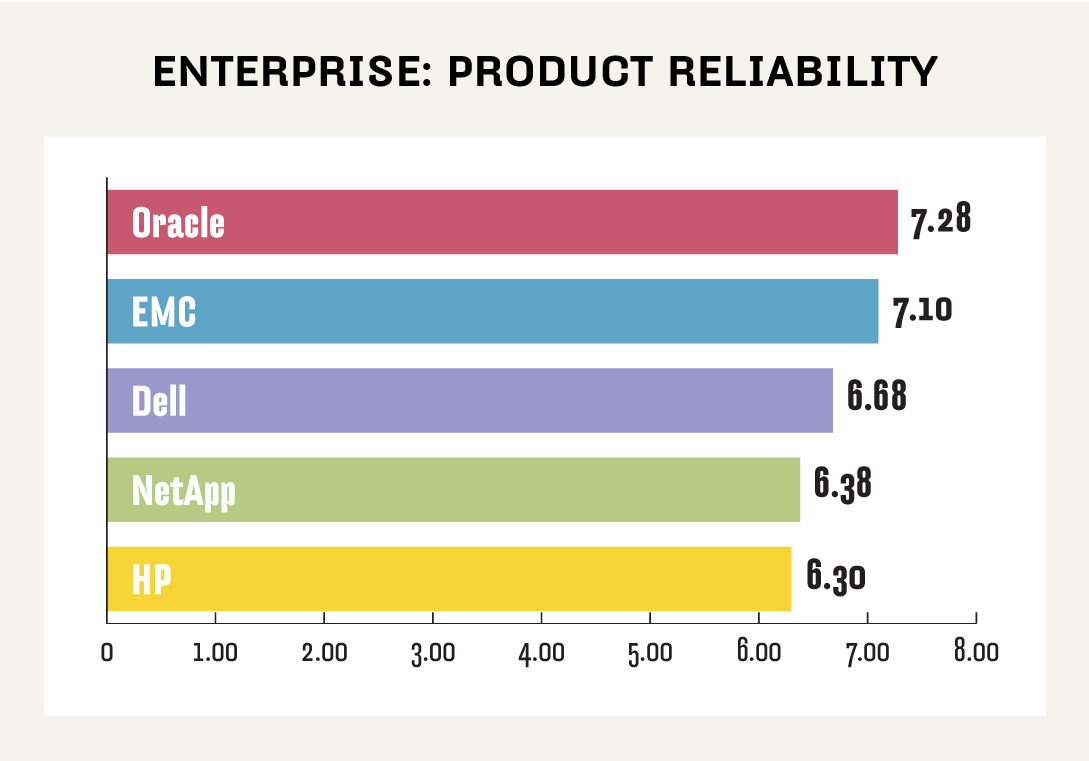 Enterprise. This was a closely contested category, but Oracle storage triumphed once again with five 7.00-plus scores to four for EMC for an overall edge of 7.28 to 7.10, respectively. Product reliability is typically one of the strongest categories for enterprise NAS products, and all finalist vendors performed well this time; Dell showed its enterprise muscle with good scores on patching issues to come in third with a 6.68, followed by NetApp (6.38) and HP (6.30). 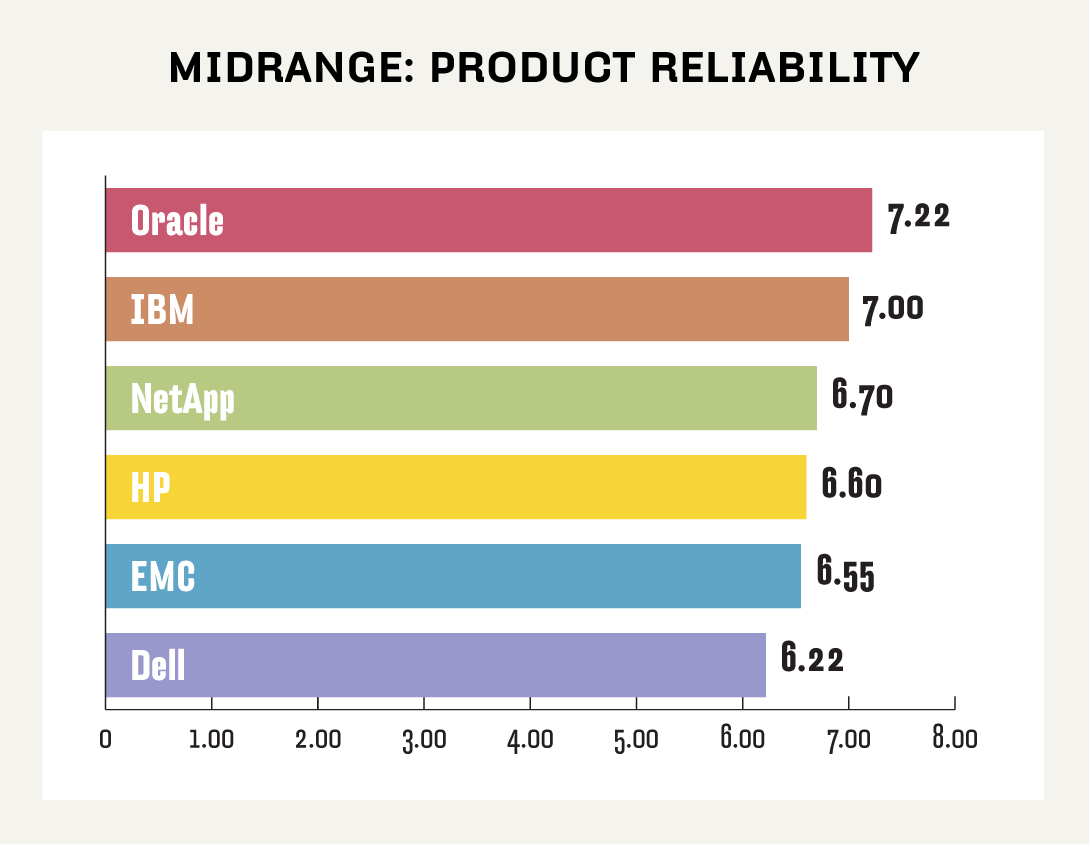 Midrange. Oracle was pressured by IBM for midrange NAS reliability honors but ultimately outpaced its rival, 7.22 to 7.00. Of the five statements in this category, Oracle had only one sub-7.00 score, while IBM had two.

Third-place finisher NetApp (6.70) had the only other above-7.00 statement score in the group for systems that experienced little downtime. 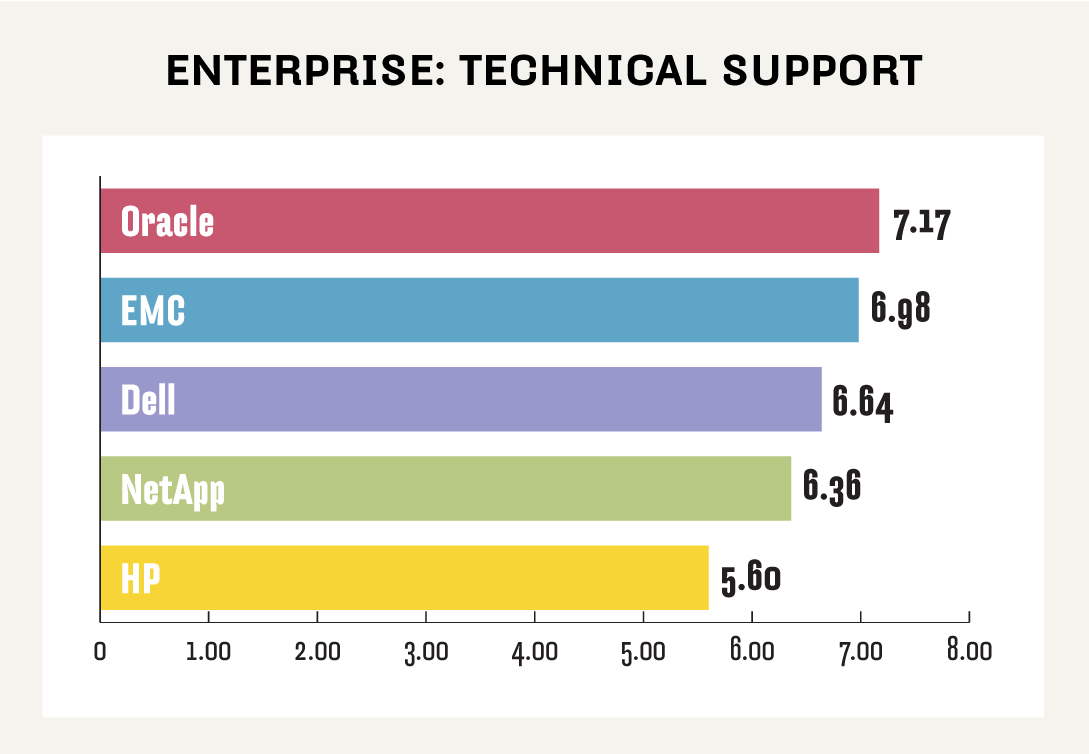 Enterprise. We’ve said many times that a solid support system can help a vendor get back into a user’s good graces with timely fixes and tech advice. This group of enterprise NAS vendors, led by Oracle’s 7.17 category average, posted the best overall average support score to date.

Oracle snared 7.00-plus scores for seven of the eight category statements, but EMC put up three sevens en route to a 6.98. Dell (6.64) registered its third third-place showing. 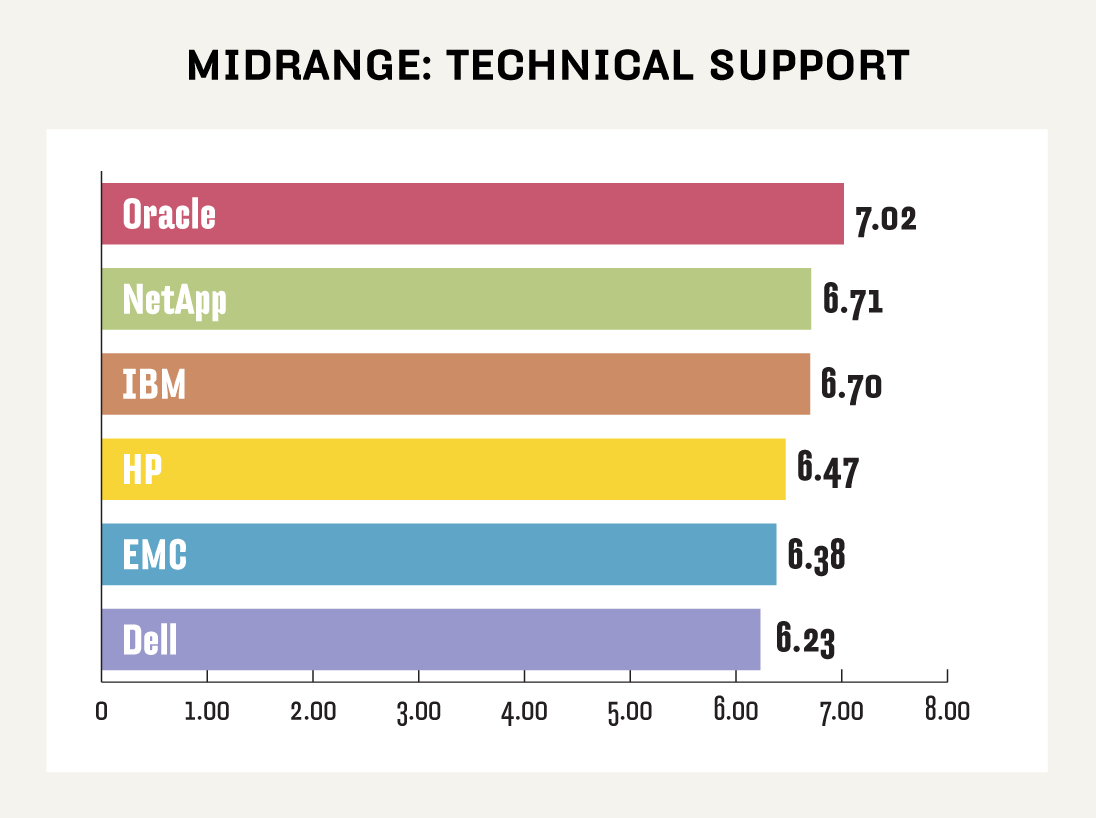 Midrange. Oracle had five scores of 7.00 or better on its way to a category-leading average of 7.02.

IBM (6.70) had the only other two 7.00-plus ratings, but it wasn’t enough to prevent Big Blue from being nudged out by the ever-steady NetApp, which built its second-place 6.71 on another narrow range of scores running from 6.59 to 6.97. 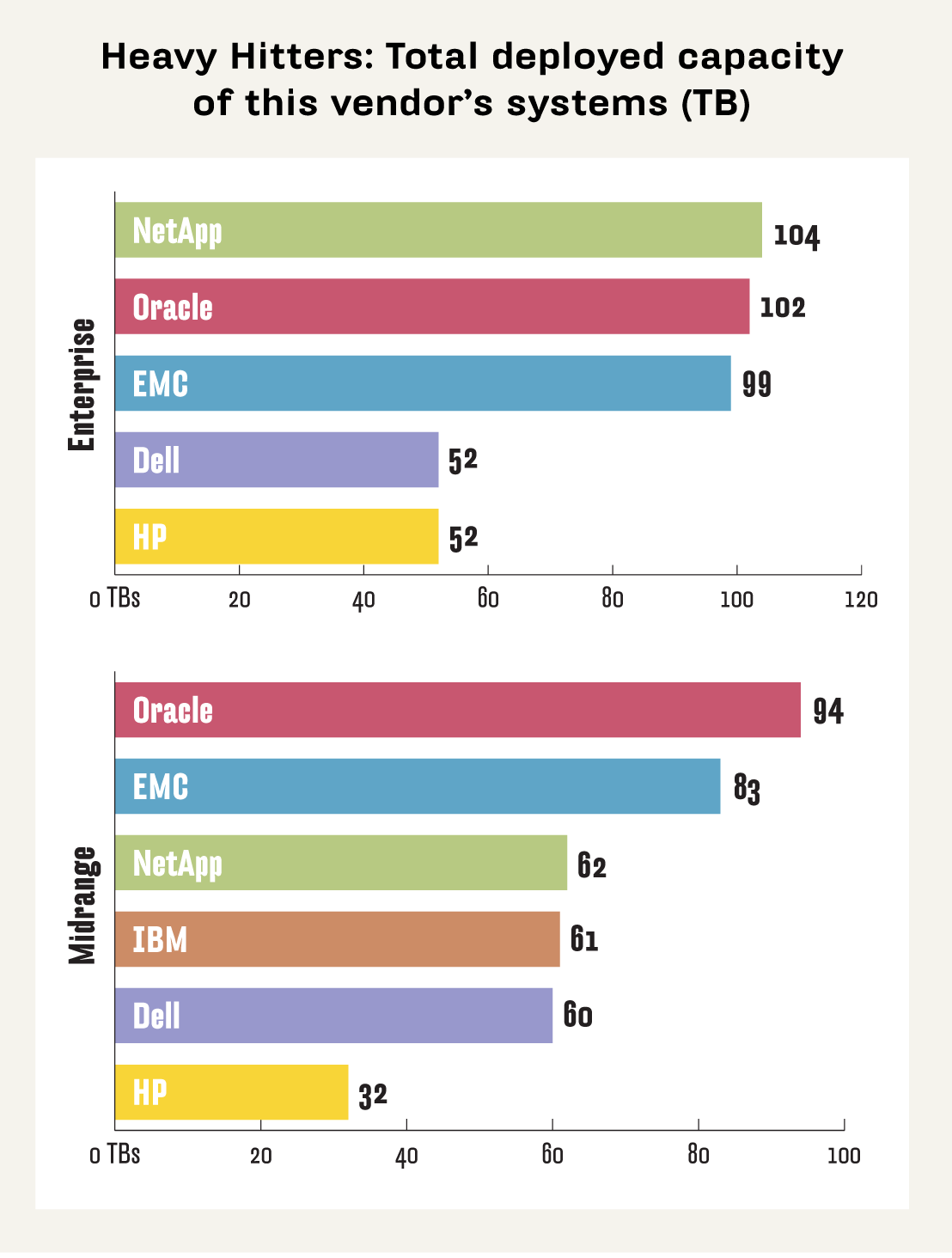 It doesn’t have any bearing on the Quality Awards survey rankings, but we ask how much of a commitment respondents have made to each vendor’s products in terms of installed . When it comes to its users’ average installed capacity, NetApp edged Oracle storage with 104 TB to Oracle’s 102 TB. Enterprise stalwart EMC wasn’t far off with 99 TB. 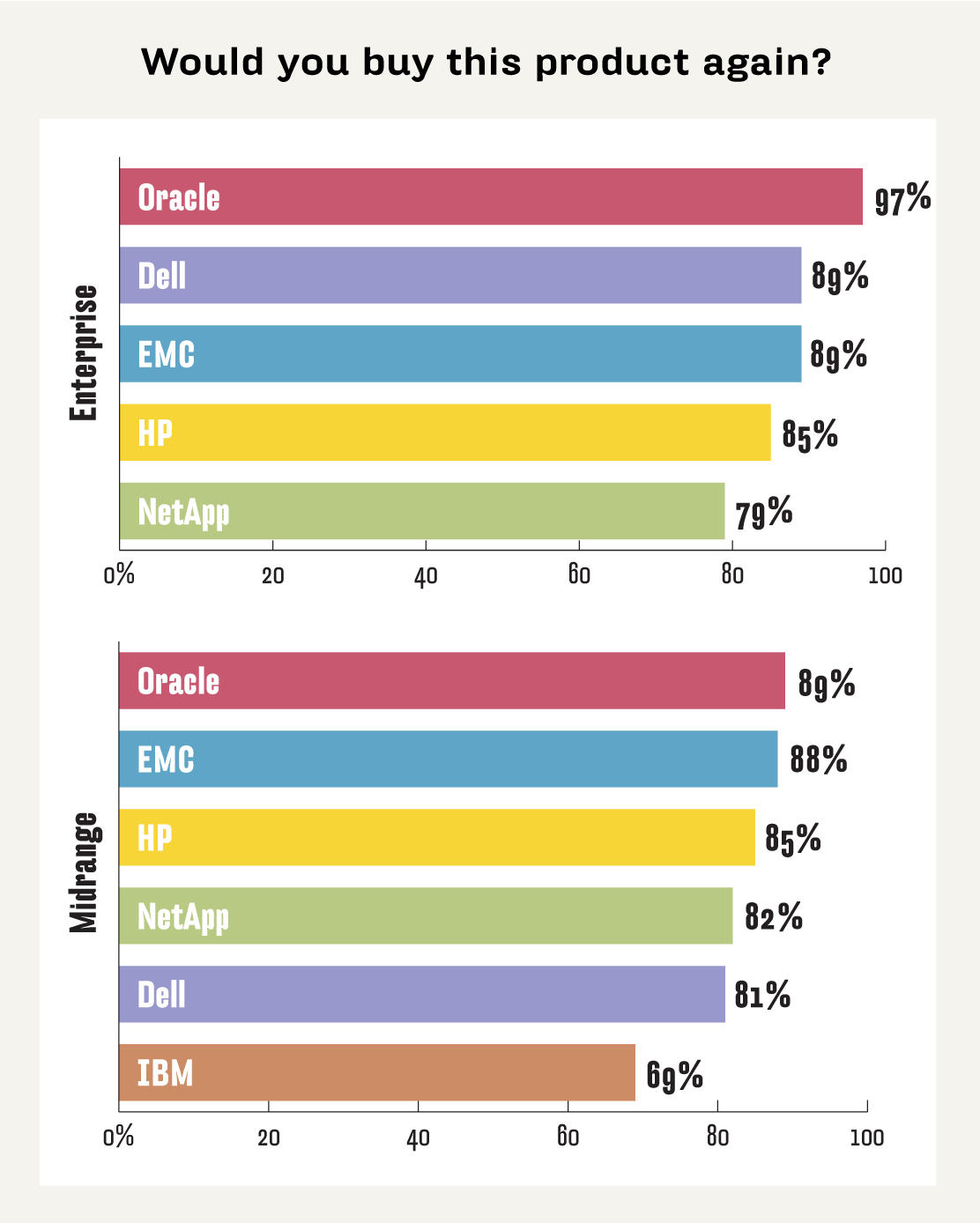 We also asked if respondents would make the same purchase again given what they know now. Fairly often we don’t see a direct correlation between ratings winners and “buy again” favorites, which may just be a case of growing comfortable with a product over time. For enterprise NAS, the buy-again numbers track the rankings fairly closely, with 97% of Oracle users ready to sign on the dotted line again. Oracle also topped the charts among midrange vendors, although less impressively, with 89% saying they’d come back for more.

Rich Castagna is editorial director of the Storage Media Group.