While it’s technically accurate to say that NetApp Inc. scored higher than Dell Inc. on the most recent Quality Awards survey for midrange storage arrays, the two leaders in data storage were head-to-head in all the rating categories, with only a slim 0.01 margin between them. NetApp surpassed Dell with a tally of 6.60 to the latter’s 6.59. Clearly, customers highly value these vendors’ products, though their loyalty has been earned via two distinct routes. NetApp is a pioneer in networked storage, and Dell has built up an impressive collection of products through various partnerships and acquisitions. 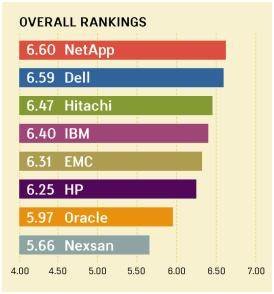 NetApp and Dell led a solid group of eight midrange storage vendors and their product suites. Hitachi Data Systems (HDS) wasn’t far behind NetApp and Dell with overall score of 6.47, and IBM, with 6.40, wasn’t too far behind. Finishing off the list were EMC Corp. (6.31), Hewlett-Packard (HP) Co. (6.25), Oracle Corp. (5.97) and Nexsan Corp. (5.66), which was new to the finalist group. (To find out more on our process and reviewed products, check out “About the Quality Awards” as well as “Products in the survey.”)

Setting the bar for its closest competition, NetApp beat out Dell in the sales-force competence category by a slight 0.02: 6.40 to 6.38. The two vendors equally split up the six statements in the category. NetApp displayed high marks with its knowledgeable sales team and reps who understand customers’ businesses and concerns. Dell’s sales reps marked well in terms of time spent learning about their customers’ industries, as well as for their flexibility and willingness to negotiate. With a 6.31 score, HDS placed third, barely behind the top contenders on the majority of the category statements. 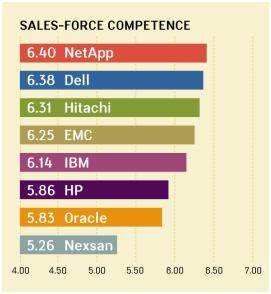 Educated sales team: The highest average score overall for a particular statement in this category was 6.36 for “The vendor’s sales support team is knowledgeable.”

Four vendors tallied 6.00 or higher on each of the six statements: NetApp, Dell, HDS and EMC.

The lowest scores were for “My sales rep keeps my interests foremost” (5.86).

Pre-sales activities and inking contracts are the pregame show with the real kickoff happening when the gear gets uncrated. Midrange vendors -- led by NetApp’s solid 6.74 for initial product quality -- are apparently doing a good job of creating a winning first impression, as the overall average for this category was second highest (just trailing the numbers for product reliability). Dell once again finished second with an equally impressive 6.68; HP tallied a 6.60 for a strong third-placing showing. NetApp scored highest for four of the six statements, with fifth-place HDS snagging the remaining two statements. 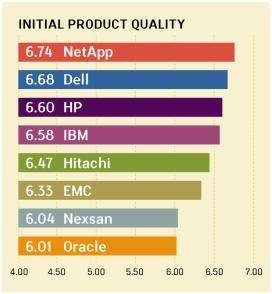 Second-place HDS had the highest statement score in the category for all products, a 6.88 for “This product’s capacity scales to meet my needs.”

Dell came in third, with top scores for overall satisfaction with features (6.71) and management features (6.63).

Along with the top three finishers, IBM had 6.00-plus scores for all category statements.

Some claim the parity among midrange arrays is so great that there’s little difference in their features. That may be true for core capabilities, but there’s still considerable differentiation among vendor’s wares. NetApp won the product features category with a 6.63 score that was enough to squeak by strong showings by HDS (6.55) and Dell (6.52). NetApp scored highest on four of the seven features statements, including those for snapshot (6.82), mirroring (6.79) and replication (6.61) capabilities, which are acknowledged strengths of NetApp products. 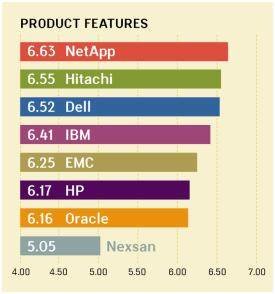 Second-place HDS had the highest statement score in the category for all products, a 6.88 for “This product’s capacity scales to meet my needs.”

Dell came in third, with top scores for overall satisfaction with features (6.71) and management features (6.63).

Along with the top three finishers, IBM had 6.00-plus scores for all category statements.

The true test of any midrange storage product is how well it fares over an extended period of time. In all but one of the past midrange surveys, the overall average for reliability was the highest among all categories -- which is also the case this time (6.45). Dell’s 6.75 put it on top, ahead of NetApp (6.69) and HDS (6.66); within striking distance were IBM, EMC and HP. Dell scored highest on four of the five statements, ceding to HDS only for the statement related to applying patches nondisruptively. With the exception of HDS, all products had their lowest scores for the nondisruptive patching statement. NetApp’s second-place finish resulted from trailing Dell by just a few hundredths of a point on several statements. 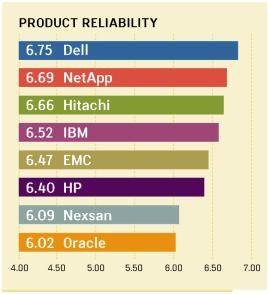 All products had average scores of 6.00-plus in the reliability category.

IBM, EMC and HP joined the three leaders by scoring 6.00-plus on all five category statements

Things will break, but the vendor that responds fast and with a good fix will please any data storage pro. Dell snared its second category win with an average score of 6.62, splitting the eight tech support statements with second-place NetApp (6.57). HDS and IBM tied for third, each tallying averages of 6.35. Dell’s strengths were delivering support as promised, rarely requiring problem escalation, solving issues in a timely manner and having well-versed support personnel. NetApp led for doing a good job training its partners, providing good training and documentation, and taking ownership of problems when they arise. 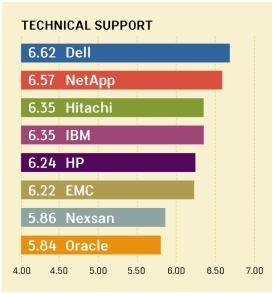 Dell’s 6.93 for “Vendor supplies support as contractually specified” was the highest rating for any statement in this category; its 6.91 for “Support personnel are knowledgeable” was the second highest.

The two leaders’ statement scores were remarkably consistent; for Dell, its eight scores had a range of 0.60; for NetApp, the range was 0.49.

Besides Dell and NetApp, HP was the only vendor to receive scores of 6.00-plus for all statements.

WOULD YOU BUY THIS PRODUCT AGAIN? 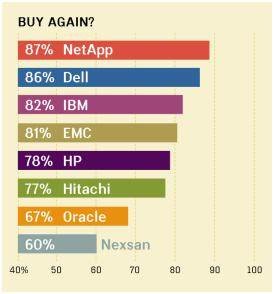 A true test of customers’ satisfaction is whether they would come back for more. Often these results don’t jibe with the category scores, but NetApp and Dell again lead the pack with solid scores that should generate some repeat business. Among NetApp users, 87% said that knowing what they know now, they would make the same purchase again. Dell users were nearly as loyal, with 86% ready to repeat their purchases. IBM (82%) and EMC (81%) users were similarly inclined, with HP (78%), HDS (77%), Oracle (67%) and Nexsan (60%) rounding out the field.

On past Quality Awards surveys, midrange users have reported generally positive reviews for their systems of choice, and the scores from this survey reinforce those impressions. The midrange segment is the fastest growing slice of the midrange storage array pie, so another survey of mostly positive results is good news for both users and vendors.

Rich Castagna is editorial director of the Storage Media Group.