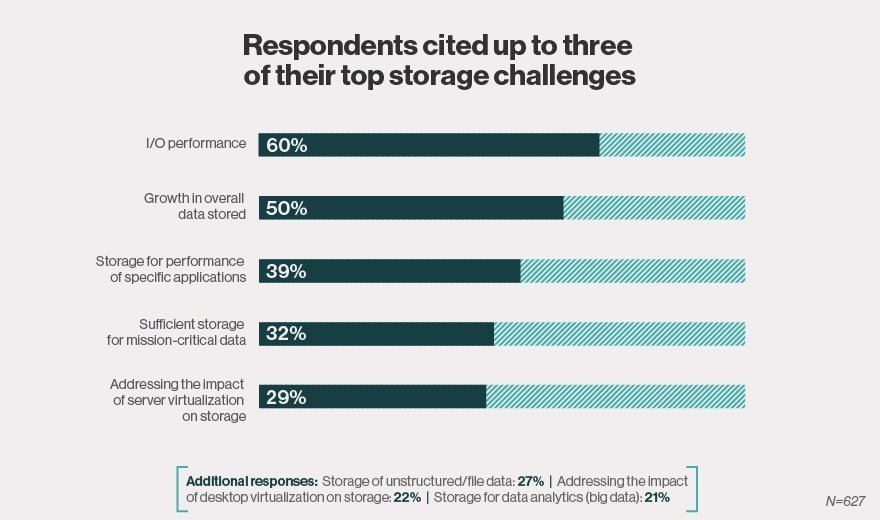 What storage-related challenges are your customers chiefly concerned about? Sixty percent of our survey respondents cited storage I/O performance, making it the No. 1 concern.

According to George Crump, president of Storage Switzerland LLC, when IT professionals say they have an I/O performance problem, what they really mean to say is that they have a problem with random I/O.

"[The popularity of flash] is being driven by a couple of reasons. One is the whole virtual environment, whether it be virtual servers or virtual desktops. Because they're putting so many workloads on one single host, those workloads are now contending and sending a lot of random I/O," he said. That random I/O is something that hard drives are particularly bad at handling, since they have to rotate and spin. Flash storage, however, does well with high levels of random I/O because it doesn't need to move at all.

"In the same fashion, as databases continue to scale and support more users, even if there's just one database on the physical server, it might have 10 or 20 times more users than it used to. And so this also generates this high level of random I/O," he said.

After storage I/O performance, half of the survey respondents cited the growth in overall data storage as a top challenge. Crump listed three areas that flash storage can help manage this:

Following growth in overage storage, the third greatest challenge was storage for performance of specific applications, cited by 39% of respondents.

Organizations typically will move databases such as Microsoft SQL Server and Oracle to flash storage because these applications result in high random I/O and might be directly responsible for revenue, Crump said. Virtual servers and virtual desktops are also good candidates for a move to flash, since they also generate high levels of random I/O. Organizations might also use flash for unstructured data to "accelerate big data analytics jobs," he said.