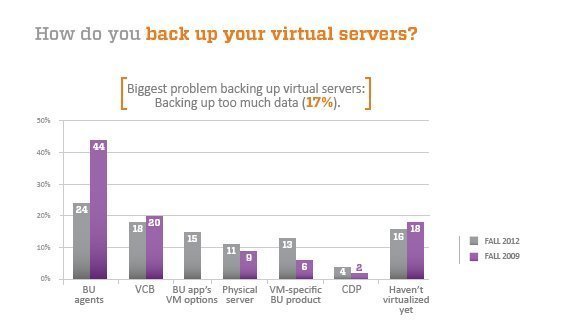 Storage administrators are slow to change their backup tools of the trade. Traditional backup agents remained the most popular choice among virtual server backup solutions in our fall 2012 survey, though that category's numbers have been cut almost in half in three years. And 18% of respondents said they were still using VMware Consolidated Backup (VCB), which VMware dropped as a technology with the release of vSphere 4 in April 2009. Fifteen percent of respondents said they were using their traditional backup application's VM backup capabilities, while tools dedicated to VM backup (in use by 13% of respondents) have made their mark.