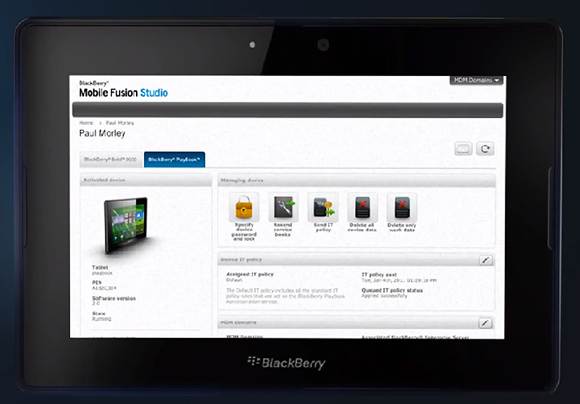 Research in Motion (RIM) has been at the forefront of the MDM industry with BlackBerry Enterprise Server (BES), an MDM solution that consolidates administration and security into a single, unified system. But BES applies only to BlackBerry devices. To address this limitation, RIM has released BlackBerry Mobile Fusion, a multi-platform MDM system that uses the end-to-end BES infrastructure to support BlackBerry smartphones, as well as PlayBook tablets, future BlackBerry 10 devices, and iOS and Android devices. From a single, Web-based interface, administrators can provision and audit their devices, control security and configuration policies, manage mobile users and groups, and implement security protections such as remote lock and wipe. However, BlackBerry Mobile Fusion is still a BlackBerry-centric solution whose support for iOS and Android is not nearly as robust as it is for BlackBerry devices. For example, you can remotely wipe any supported device, but on BlackBerry devices, you can also isolate corporate data and wipe only that information. Even so, BlackBerry Mobile Fusion makes it possible to view devices on different platforms and perform common management tasks from a single interface.