Flexible, pay-as-you-go cloud pricing models have attracted enterprise customers to cloud services, and providers are struggling to turn a profit.

In a recent TechTarget survey of cloud providers, 44.8% of nearly 300 respondents listed profitability of cloud services as their main business challenge. The problem will only worsen as cloud services become commoditized, said Tom Nolle, president of CIMI Corp., a consultancy in Voorhees, N.J.

The upfront costs associated with building data centers, coupled with unrealistic buyer expectations and competitive cloud pricing, can set cloud providers up for failure. Cloud providers can find profits by differentiation through value-added services and with a little help from larger cloud players or colocation.

The cloud pricing model: Why are providers struggling?

"Many of these [new] cloud customers are just dabbling -- it's not like selling them a three-year contract for MPLS," she said. 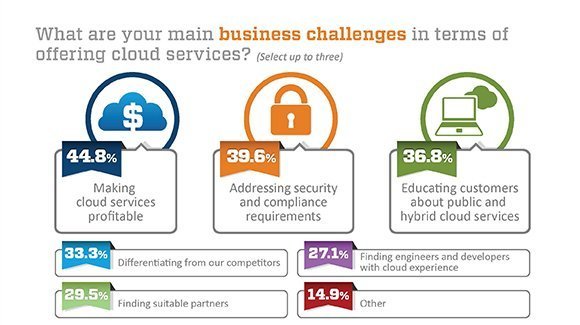 Many new providers start with Infrastructure as a Service (IaaS) in hopes of profiting from their own unused infrastructure, but the low, market-based pricing model established by cloud computing giant Amazon Web Services (AWS) leaves providers with little room for margins.

"It's hard for providers to operate in a way that is very low-cost, like Amazon, while still being profitable, unless providers have a volume similar to Amazon," she said.

Aspiring cloud providers should identify a specific market to sell to before launching a cloud business, Nolle said. "Going out and launching IaaS with no idea of who [the providers] plan on selling to, and no idea what the value proposition will be for the purchase of their [services] is not doing it right," he said.

New entrants into the cloud services market can avoid direct competition with IaaS providers like AWS by offering differentiated services. Some providers have succeeded by moving higher in the stack, Frost & Sullivan's Stadtmueller said.

Cordys, a Netherlands-based cloud Platform as a Service (PaaS) provider offers targeted services for providers looking to break into cloud services and PaaS offerings for system integrators. Cordys, which doesn't have its own cloud data centers, uses both Rackspace and Amazon for its clients' IaaS needs, depending on the terms of the clients' service-level agreement (SLA), said Hans de Visser, chief strategy officer for Cordys.

The partnership between Cordys and other service and cloud providers has allowed the company to offer users value-added services and helped the company retain its customers, de Visser said.

It's Amazon against Microsoft in cloud pricing competition

"The more [providers] are tailoring offerings to the specific needs of the customer, the harder it will be for a customer to go to another cloud provider who can offer the exact same thing," he said.

Cloud providers like Cordys -- and especially small or emerging providers -- cannot afford to build their own data centers. Instead, using another cloud provider's infrastructure -- like Amazon's -- or a colocation provider could be a good way to get started, Frost & Sullivan's Stadtmueller said.

"If an IT or service provider wants to start offering cloud services, they could house their customers in an Amazon data center, so the infrastructure burden doesn't fall on the new provider," she said.

"Providers can add on these very valuable wraparound services at the platform layer, sell it as a package which commands a higher price, and there will be enough revenue to pay the other cloud provider and still make a hefty margin," she said.

Let us know what you think about the story; email: Gina Narcisi, News Writer and follow @GeeNarcisi on Twitter.

AnonymousUser - 10 Jun 2013 1:48 AM
I agree with parts of this post, but also disagree that it seems to suggest that service providers cannot compete at the IaaS level alone.

The issue most of them have is not matching AWS pricing, for resources like raw compute there is plenty of places that are cheaper than AWS and will remain so. It is quite possible (at todays prices anyway) to make healthy margin from those numbers. It's fair to say it may be harder to in the future though, and companies in general should not try to compete directly with AWS on pricing along.

There are two issues really, which are how to adjust their pricing models to support AWS like pricing. For a lot of them jumping from a monthly paid, 12 or 36 month commit model to a pay-as-you-go model is just not something they can deal with, they cannot model it into their cashflow and ROI plans.

Actually, a lot of their customers aren't completely happy with it either, wanting flexibility and agility with their IaaS services, but still wanting a predictable bill at the end of the month, which obviously is something of a contradiction.

You are right though to point out that finding ways to differentiate their solutions and services are the key to long term growth, as well as moving up the stack in terms of the services that they offer (PaaS, SaaS etc), which is where the second issue comes in. A lot of service providers think the solution is to build an all singing all dancing cloud platform, spending years and millions of dollars on the process. Finally they bring something to market that doesn't actually suit their customer base. The key is to identify and group your existing and potential customers, work out what you can do for a subset of them which will differentiate you, and get to market quickly. Once in the market, learn, evolve and repeat.

Funnily enough I'm presenting on this very topic at HostingCon in Austin next week 'How to grow your cloud through differentiation'.