Security VARs and solution providers told SearchSecurityChannel.com that their businesses are improving following significant growth in 2010. This year is also shaping up to be profitable, they say, thanks in large part to an expected increase in information security spending.

SMB customers
For Clare Computer Solutions in San Ramon, Calif., managed services for small and midsized customers has been key to the company's recent growth.

"Overall our company growth was modest; what grew significantly was the managed services aspect, which was huge," said Bruce Campbell, vice president of marketing for Clare Computer Solutions, noting that its managed services revenue was up 30% in January 2011 compared to the same month in 2010.

Many of our customers hadn't bought anything new
in 4-5 years.
But now
we are
seeing customers make new equipment purchases and start new security projects.

"Customers who are still in business realize they've weathered the worst of the recession, even if it is still sluggish," Campbell said. "They're cautious, but they realize now if they want to stay in business, they need to take better care to invest in their security infrastructure." He also said small companies are realizing they are just as likely to be victimized by a cyberattack as any large enterprise.

Compliance requirements
The need to comply with security standards such as HIPAA, SOX and PCI DSS has also brought in new business to security solution providers.

Mark Fair, vice president of customer services at Livermore, Calif.-based Activant Solutions Inc., said his company is reaping the benefits of the work it did to educate customers during the slower years.

"We made a very conscious effort to inform our customers about PCI standards," Fair said. Many of Activant's customers are level-4 retailers, as defined by the PCI DSS, meaning they conduct fewer than 20,000 payment card transactions annually.

"We did the groundwork for one and a half years, advising customers on topics like wireless security, encryption, signature capture pads, firewalls and antivirus," Fair continued. "We migrated many of our customers from old, non-PCI compliant hardware to newer technology, and we increased our subscriber base to our network security solutions."

Pent up demand
In 2008 and 2009, many security VARs and solution providers felt they were knocking on a brick wall. They made dozens or even hundreds of sales calls to educate customers about the benefits of security projects, but customers simply didn't have the budget to sign on the dotted line.

Some of our growth was organic, and some was
a result of taking market share from distributors who had battened down the hatches
at the
beginning of
the recession and cut
their
costs and investments.

Finally last year, many security solution providers reported feeling as though the wall had finally cracked and a wave of pent up demand came rushing in.

Fishnet Security Inc. in Kansas City, Mo., was one solution provider that rode the incoming wave of demand. Gordon Shevlin, executive vice president of vendor relations, noted that Fishnet's business grew 31% from 2009 to 2010.

"Business is going very well now," Shevlin said. "It's all the pent up demand we're finally seeing come in, as well as enterprises just being more confident right now, and recognizing that they really need more security."

New projects
Customers did buy some security products and services in 2008 and 2009, but they were mostly replacing end-of-life products or continuing current services. In 2010, security solution providers began to receive more new projects from their customers.

For Sarsfield Technology in Troy, Mich., the end of 2010 was the busiest business period they've had in the past 2-3 years. Sarsfield's president, Chris Sarsfield, predicted that this trend will continue throughout 2011.

"Our business has picked up tremendously, and it seems that is mostly organic", Sarsfield said. "Many of our customers hadn't bought anything new in 4-5 years. But now we are seeing customers make new equipment purchases and start new security projects."

Investment pay-off
While many solution providers were forced to cut costs during the recession, some actually invested more heavily in marketing and channel development. They essentially gambled that their investments would pay off substantially when the economy turned around.

That's exactly what happened at Wick Hill Group, a private solution provider with a strong focus on security, operating in the U.K. and Germany. Ian Kilpatrick, chairman of Wick Hill, reported that the company invested heavily for growth at the beginning of the recession, which paid off with a 20% growth in 2010 over 2009; the company is forecasting similar growth in 2011.

The increased spending that security solution providers have been absorbing reflects and even exceeds the trend reported by industry analysts. In its report, Forrsights: The Evolution of IT Security, 2010 to 2011, published Feb. 15, 2011, Cambridge, Mass.-based Forrester Research Inc. detailed the results of its survey of more than 2,000 IT security decision makers in North America and Europe. 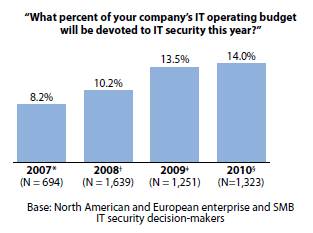 "Security budgets continue to grow, but also continue to face value perception and justification challenges," the Forrester report stated. "Security responsibilities and programs have overwhelmed most IT security groups, and while budgets continue to grow in response, spending patterns show an over-emphasis on tactical and reactive technologies, as well as organizations turning to outsourcing and managed services firms for expertise and relief."

While the economy is still tepid, security solution providers are at the front of the recovery as they offer security products and services their customers need in 2011. As Sarsfield commented, "People are opening their pocketbooks to spend on technology now."

Is your security business on the upswing? What has been the driving factor? Write to me at editor@SearchSecurityChannel.com.