Solutions provider takeaway: Problems you may have had with SQL Server Reporting Services (SSRS) 2005 Report Manager have been addressed in SSRM 2008. SSRS 2008 Report Manager architecture and scalability changes include now being able to balance memory usage between large and small reports.

Report Manager remains the default tool for end users to view and manage report content for Report Server in native mode. It is now the only tool available to manage reports, models, data sources, subscriptions, and permissions.

If you are going to use SSRS in SharePoint integrated mode, see Chapter 36, "Managing Reports in SharePoint." That chapter provides more information about managing reports via the SharePoint user interface. 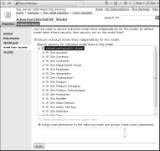 On the Data Source page, a Generate Model button is available. This button brings up a page that enables you to specify the name, description, and location of the model. After a model has been created, it can be managed in Report Manager. Figure 4.12 shows a general view of a model. Note the Edit and Update links. Edit allows saving the model .smdl file so that it can be edited. Update allows uploading the latest .smdl file to replace the existing one in Report Manager.

The report engine is responsible for processing and rendering reports. A primary goal behind architecture changes in SSRS 2008 was to make the report engine capable of scal-able enterprise reporting.

SSRS2K5 suffered from a few limitations with regard to scalability and rendering consistency:

Here are the key changes that were made in the report engine in SSRS 2008 to address these problems:

SSRS 2008 enables administrators to specify minimum and maximum memory settings, and SSRS tries to keep within that bound by swapping memory to the file system when under memory pressure. For more information, see the "Memory Management" section in Chapter 2. Figure 4.13 shows the difference in behavior between memory usage in SSRS2K5 and 2008. In 2005, memory pressure could cause SSRS to fall over and recycle the application domain, which essentially kills all reporting requests. In 2008, memory pres-sure causes the report engine to swap memory to a file system cache and reduce the memory usage to remain below the maximum memory allocated to SSRS. This allows SSRS to scale to meet the needs of executing large reports and a large number of report-execution requests.

The primary enhancement in the processing engine in SSRS 2008 is on-demand processing, which allows processing each page of a report when the user actually wants to view it. This avoids the burden on the report processor to handle large amounts of data processing up front for all runtime requests.

In 2005, report processing and rendering follows this workflow:

In 2008, the renderers are invoked right after the data-fetch stage. Subsequent processing is triggered by each page-rendering request. Computations such as grouping, sorting, and

aggregation are done the first time a data region is accessed through the ROM. Report items such as text box values and style expressions are evaluated only when the relevant page is rendered. A report item cache is used to help optimize performance.

Here are some key new report-rendering changes in SSRS 2008: