This chapter presents assessment systems used around the world to measure green buildings, formulas for calculating Data Center energy efficiency, and an overview of industry organizations pursuing the development of each. This chapter also offers guidance for putting Data Center metrics in the appropriate context to understand a facility's performance.

Why Measure in the Data Center

There's an often-used management adage that says you can't manage what you don't measure, and it certainly applies to Data Centers.

You not only need to accurately gauge your Data Center's capacity and resources to operate the facility effectively, but you also need to know how quickly you consume those resources and what type and quantity of byproducts the Data Center produces to know how green it is. Taking measurements is also crucial to determine the impact of any green improvements that you make upon the server environment. Without such information you can't know whether those upgrades have been successful, and if so to what extent, how fast their return on investment is, or how to prioritize future Data Center upgrades.

Table 2.1 summarizes the results, broken down by geographic theater. Interestingly, those in the United States appear to be using Data Center metrics most often yet those in Western Europe have the greatest intention to do so in the future. 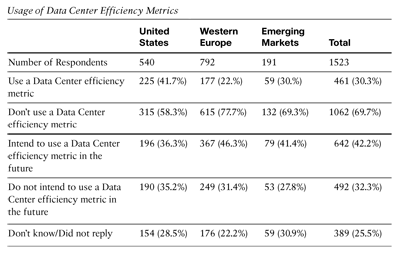 It's possible that the survey results in Table 2.1 show a greater adoption of Data Center metrics than is truly happening. All the survey participants were, as noted, attendees at Data Center conferences. Companies that commit money and staff time for employees to attend such events are actively seeking Data Center best practices for their facilities. How many more businesses, particularly those with makeshift server environments, aren't sending employees to such conferences and aren't focusing on the efficiency of their facility?

What to Measure in the Data Center

Knowing the importance of taking measurements in your Data Center, what elements are useful to measure to evaluate how green a room is and to quantify the impact of various upgrades? The sections that follow address this question.

The single-most important resource for you to measure in your Data Center is energy. How much power the facility has and how much power is consumed by both IT equipment and supporting infrastructure such as cooling systems and lighting.

It's vital to measure energy for several reasons:

Because of these four conditions, green Data Center improvements that conserve energy provide some of the largest benefits to your business. Measuring power in your Data Center is, therefore, also the best way to appraise that value and understand the real impact of those green improvements.

Another benchmark of a Data Center's environmental impact is its carbon footprint -- the amount of carbon dioxide produced as part of the ongoing operation of the facility.

Carbon dioxide is one of a handful of substances dubbed greenhouse gases that trap heat from the sun and warm the Earth. (Water vapor is the most common greenhouse gas, followed by carbon dioxide, methane, nitrous oxide, ozone, and chlorofluorocarbons.)

That warming effect is necessary to a certain degree. Without it, the Earth's mean surface temperature would be --2 degrees Fahrenheit (--19 degrees Celsius) rather than today's 57 degrees Fahrenheit (14 degrees Celsius), according to the Intergovernmental Panel on Climate Change document, "Climate Change 2007: The Physical Science Basis." Too much warming can cause environmental problems, though, changing weather patterns, causing sea levels to rise, and altering the habitats of various animals, plants, and, ultimately, people.

Many scientists and environmentalists today are concerned that human activity is causing such problems, prompting them and various government agencies worldwide to call for reductions in carbon dioxide emissions. Although carbon dioxide occurs naturally -- people, animals, and plants all produce it; volcanoes and hot springs emit it as well -- carbon is also a byproduct of burning fossil fuels.

More than 80 percent of greenhouse gas emissions in the United States, for example, are energy-related carbon dioxide -- originating from the combustion of petroleum, coal, and natural gas -- according to the U.S. Department of Energy's Energy Information Administration. (EIA reports of U.S. greenhouse gas emissions are available online for every year since 1996 at http://www.eia.doe.gov/oiaf/1605/ggrpt/index.html.)

The links from energy production to carbon dioxide to climate change mean that the less energy your Data Center uses, the smaller its impact upon the environment.

One strategy for dealing with carbon emissions is to employ carbon offsets, measures that reduce carbon dioxide. In simple terms, you compensate for the amount of carbon that you (or in this case, your Data Center) generate by sponsoring a project that prevents an equal amount from being created.

Examples of carbon offsets include

Although it's possible to directly introduce carbon-offsetting measures at your Data Center facility -- building a wind farm on land that you own, for example -- the more common approach is to pay an environmental organization to do the activity.

More information about renewable energy sources and regional electricity mixes is provided in Chapter 4, "Powering Your Way to a Greener Data Center."

Energy usage and carbon footprint are the features most commonly discussed and measured to determine how green a Data Center is; however, other elements warrant attention as well. Other green details to consider include the following:

Generator emissions: Standby generators, used to keep a Data Center running when commercial power fails, consume fuel when in operation and can emit a range of pollutants including nitrogen oxides, hydrocarbons, carbon monoxide, carbon dioxide, and particulate matter. Knowing the consumption and emissions of your Data Center generators provide greater insight into the facility's environmental impact.

Heat waste: Most strategies regarding Data Center temperatures focus on how to best remove hot server exhaust from the hosting environment yet pay little attention to the ultimate disposition of Data Center heat waste. If your Data Center cooling system is highly efficient and does a superb job of keeping equipment cool but raises temperatures outdoors, how green is it really? Hot building exhaust is blamed for increasing the severity of several undesirable environmental and health problems including air pollution, heat-related illnesses, deteriorated water quality, and increased energy consumption during summer evenings. The phenomenon known as heat islands is discussed further in Chapter 3, "Green Design and Build Strategies."

Water consumption: Major Data Centers consume millions of gallons/liters of water per month through standard cooling processes as hot water is vaporized from a Data Center's cooling tower and has to be replaced. (Water used to replace what has evaporated is known as makeup water.) Although this consumption hasn't received the same level of attention from governments and the public in recent years as energy use and carbon emissions, removing such large amounts of water from local supplies is a tremendous environmental impact.

The more of these Data Center elements that you measure, the more opportunities to make your server environment greener that you uncover. Tips on reducing the impact of these features are provided in Chapter 4 and Chapter 5, "Cooling Your Way to a Greener Data Center."

Printed with permission from Cisco Press. Copyright 2009. Grow a Greener Data Center: A guide to building and operating energy-efficient, ecologically sensitive server environments by Douglas Alger. For more information about this title and other similar books, please visit Cisco Press.