Complete the following steps to perform a MITM attack according to Figure 2.17 with Cain and Abel:

Layer 2 in the OSI model (Ethernet) is a key target for attackers. The attack becomes quite easy to execute with IP tools such as Windoze Interceptor, Dsniff, and Cain and Abel. Man-in-the-middle attacks have also resurfaced in the application world using the same preceding techniques, but with cookies and certificates instead of ARP packets.

Similar to our discussion in Chapter 1 on how several attacks don't change but instead get modified, the idea of man-in-the-middle attacks can be applied to Fibre Channel frames also. 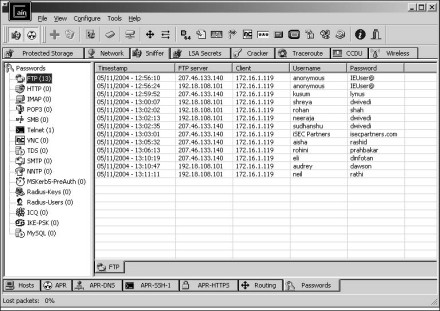 Figure 2.24 Capture password hashes due to the Man-in-the-middle attack.

The MITM attack is possible due to the lack of authentication in ARP packets as well as the insecurities of IPv4. As demonstrated with Cain and Abel, the attack can be quite trivial, rendering the attack as a high security threat, but a high-risk item (see the SBR chart in Figure 2.25). 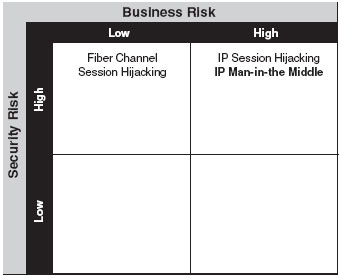 In Fibre Channel fabrics, man-in-the-middle attacks are more difficult than IP and bear a smaller amount of risk; however, the weaknesses in the fabric are still very apparent.

In order to conduct a MITM attack on a Fibre Channel network, name server pollution is required. Described earlier in this chapter, there are significant weaknesses in the FLOGI and PLOGI processes that can be used to pollute the name server. 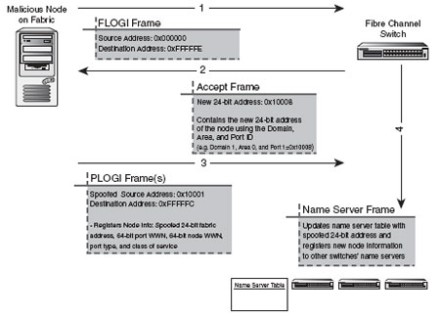 In order for two Fibre Channel nodes to communicate with each other, they must know the others' 24-bit address and port ID on the fabric. The fabric address is given and updated during the FLOGI and PLOGI processes, which also has no authentication process (similar to ARP). The port ID is the physical port number that the node is connected to on the switch. If one node wanted to communicate to another node, it would then send frames to the other node's 24-bit address, which would be the Destination address (D_ID) in a frame header. The switch would receive the frame, match the 24-bit address to the correct port ID, which is completed via the switches' name server table, in order to find the correct physical port of the destination node, and then pass the frame on to the correct port. See figure 2.27 for normal communication in a fabric. 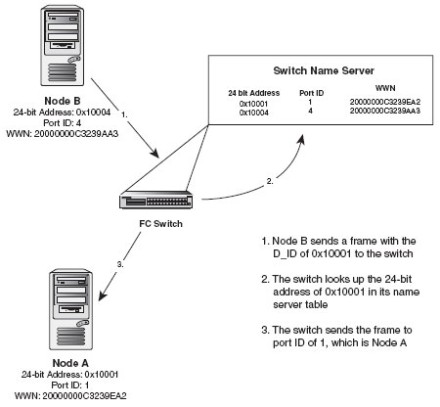 In order to perform a Fibre Channel MITM attack, a malicious node would spoof its 24-bit address to match the address of its target node (Node A). Because name server information can be automatically updated during the PLOGI process (remember that the FLOGI and PLOGI processes update name server information without authentication), the malicious user would then perform a PLOGI, sending their port ID, WWN, and spoofed 24-bit address to the fabric address of 0xFFFFFC for all the switches in the fabric to accept. The switches, with the incorrect information for the 24-bit address, would update their name servers with the port ID, WWN, and the spoofed 24-bit address. When another node wants to communicate to the real node, the switch's routing table will map the 24-bit address, which was spoofed, to a different port ID—hence, routing the frame to a different node. See Figure 2.28 for details. 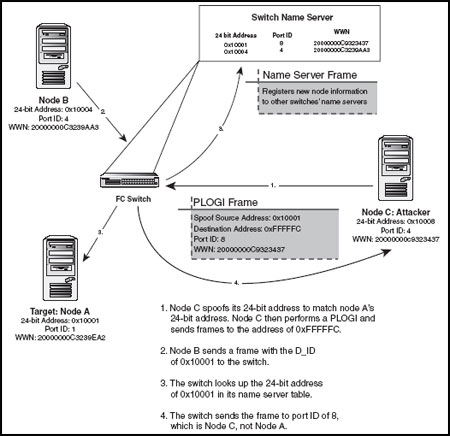 Figure 2.28 Man-in-the-middle attack on a fabric.

The primary security weakness is the lack of authentication when sending FLOGI or PLOGI frames that consequently update name server information on switches. In Figure 2.28, node A has a 24-bit fabric address of 0x10001 and node B has a 24-bit fabric address of 0x10002. Fabric routing tables and rules would allow the two entities to communicate with each other quite easily using port ID 1 and port ID 2. When the malicious node, node C, performed a man-in-the-middle attack to intercept the traffic between node A and node B, the following steps were performed:

The Fibre Channel MITM attack is possible due to the lack of authentication in PLOGI frames, as well as the security weaknesses during the name server update process. As demonstrated with the preceding examples, the attack is quite possible in SAN fabrics; however, it is significantly difficult due to the speeds that an attacker would have to emulate in order to switch frames in the SAN at 2gb/sec. The throughput/performance part of the attacks makes its risk value lower, rendering the attack as a high security threat, but a low-risk item (see Figure 2.29). 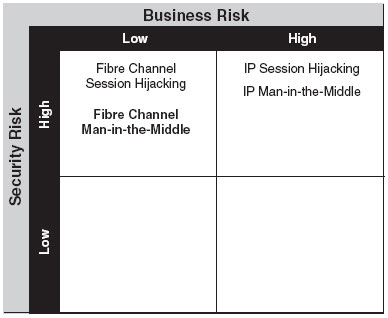 Attack description -- Sending a fake PLOGI frame to the switch in order to register a target's 24-bit address to the attacker's WWN and port ID; hence, pollute the name server to route traffic incorrectly to the malicious node.

Attack description -- Corrupting the name server information on Fibre Channel switches where an attacker registers its 24-bit address to a target's WWN. If any legitimate node attempts to communicate to the target, the traffic is redirected to the attacker's machine by the incorrect name server information (similar to a man-in-the-middle attack in the IP architecture).

In this chapter, we discussed the risks of Fibre Channel communication in SANs. This chapter is the first of three chapters that will describe the risks of SANs and describe how to actually expose each risk identified.

The chapter was able to identify some of the key overall issues of Fibre Channel as they pertain to the six areas of security that can be applied to any entity, including authentication, authorization, encryption, auditing, integrity, and availability. The chapter also identified the security strengths and weaknesses of each category in order to determine the level of risks that can be exposed. Unfortunately, most SANs are missing some of the major security entities that are required for proper security, including authentication, encryption, and integrity. Furthermore, many security entities do not exist, such as authorization, are not ideal, and do not hold up to many SAN attacks, such as spoofing.