The following sections discuss the weaknesses with Fibre Channel at the frame level.

A sequence is a set of frames transmitted unidirectionally from one entity to another in order to maintain a session between two nodes. A frame uses a (Seq_ID) and a Sequence Count (Seq_CNT) in each frame to identify, control, and maintain the session. Each frame includes the Sequence ID (Seq_ID) that identifies the unique session that the frame belongs to. For example, if a node were communicating with several different entities, each session would have a unique Seq_ID to identify which frame belongs to which session. In addition to the Sequence ID, the Sequence Count is used also. The Sequence Count is used to ensure frames are placed in the right order by the entities. Each Seq_CNT is incremented by 1 for each subsequent data frame.

The Sequence ID and Sequence Count have similar responsibilities in a Fibre Channel frame as the Initial Sequence Number (ISN) in an IP packet. The ISN in an IP packet is also responsible for maintaining a session between two nodes on an IP network.

In order for a session to be maintained between two nodes, all session information must be maintained. The security weakness with IP networks is the predictable (guessable) ISN. An ISN is the core component to allow packets to become a part of an established session. If the ISN is predictable, it would potentially allow unauthorized packets to join or hijack the session. A third-party entity could inject packets with the next relevant ISN and take control of the established session. For example, for simplicity's sake, let's say two of the first three packets in a session have the ISN of 123 for packet number one and 456 for packet number two. An attacker could probably predict that the third packet should have an ISN of 789 to be part of the existing session. If the attacker sends their packet to the target first and uses the ISN of 789, the session will then be handed over to the attacker and not the legitimate node. This means that if an entity was able to guess the next ISN in the sequence and the entity was able to inject packets in an established session, the entity would own the session. See Figure 2.5 for more details. 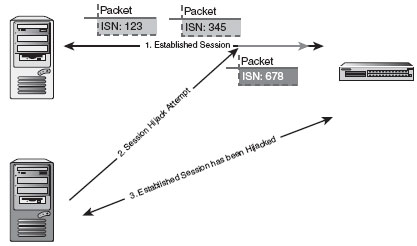 As shown in Figure 2.5, a weak or predictable ISN can leave an established and trusted session vulnerable to a session hijacking attack. A predictable value to allow/deny entities into a trusted session should not be used. ISN values must be unpredictable and unique, not unpredictable or unique. This premise has also plagued HTTP (web) applications. Session identifiers in cookies used in HTTP applications, known as the Session ID, are being used to maintain sessions in the stateless HTTP protocols. While applications distribute cookies with unique Session IDs, the Session IDs are not necessarily unpredictable. This allowed unauthorized users to guess or predict the Session ID and log into applications using another user's existing sessions. For example, if a legitimate user and a malicious user logged on to their favorite webmail service, they would receive a cookie from the webmail site that contains a Session ID. Both users would present their cookie to the site each time they want to check email. If the site granted a Session ID of 100 to the legitimate user and 101 to the malicious user, then an attacker could guess/predict that the Session IDs is a three-character digit being incremented by one for any new session. The attacker could access the site under the legitimate user's profile by changing their Session ID in their cookie to 100 and send it to the site. Once the site receives the cookie from the malicious user that contains the Session ID of 100, it would recognize the attacker as the legitimate user because the site recognizes the user based on the Session ID in a user's cookie. This would allow the attacker to log to the legitimate user's session and give them access to profile pages, credit card pages, and account information.

What does this mean? Well, this does not mean that you can go download Hunt, Ettercap, or WebProxy and begin to perform session hijack attacks on Fibre Channel SANs (Hunt, Ettercap, and WebProxy are IP/Application tools to hijack sessions in IP networks or web applications). Although the weaknesses are there in a Fibre Channel frame, the threat and exposure is relatively low. A Fibre Channel analyzer is required to modify frames and inject them into established session. With speeds up to 2gb/sec, this is not an easy task. Nonetheless, the weakness of session management with the Seq_ID and Seq_CNT fields in a Fibre Channel frame do exist, which tells us that security may have not been a significant factor when developing session management for Fibre Channel or Fibre Channel-enabled products.

Session hijacking is the act of an untrusted third party intercepting and controlling (hijacking) a valid session between two trusted entities. Telnet is a good example of a trusted session between two entities that can be hijacked by an anonymous third party on the segment if weak ISNs are being used for the TCP packets. Figure 2.6 shows a high-level example of session hijacking. 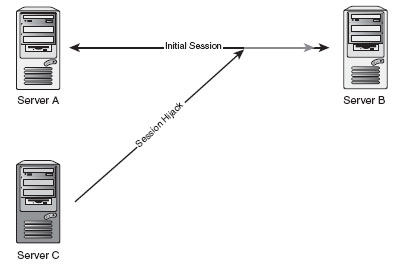 Session hijacking was first introduced many years ago in the IP networking world for weak and predictable Initial Sequence Numbers in TCP headers for IP packets.

The attack became quite easy to execute with IP tools such as Hunt (http://lin.fsid. cvut.cz/~kra/#HUNT) and Ettercap (http://ettercap.sourceforge.net/). Session hijacking resurfaced in the application world when weak and predictable session IDs became apparent in application cookies to maintain state in web (HTTP) communication. Similar to our discussion in Chapter 1 on how several attacks don't change, but get modified, the idea of session hijacking can be applied to Fibre Channel frames also.