The lack of encryption at the frame level is not a significant negative issue, considering the amount of performance impact the storage network would have if all frames were encrypted. Furthermore, sniffing is a difficult task in a Fibre Channel SAN since it can only take place if a hardware device is connected to a node in the SAN or if a Cisco MDS switch is comprised and configured to send traffic remotely to the software only sniffer called Ethereal. Nevertheless, the lack of data obfuscation that contains sensitive information can allow unauthorized users to view information that is required to complete an attack. In fact, a key starting point for successful attackers is the ability to sniff clear-text communication, which can be conducted with any traffic analyzer.

The risk and weaknesses of Fibre Channel start with the clear-text transmission of sensitive information, which directly results in enumeration (the first basic step for an attacker). Enumeration is a phase where an unauthorized user would gather information about the network, architecture, device, or application they want to compromise. The result from this phase is the actual fuel that is used to perform an attack. You'll notice that the enumeration phase is not something shown in Hollywood security films, but the truth is that the enumeration phase of an attack is usually 60 to 80 percent of the process itself. The actual act of performing an attack is less than a quarter of the work. As stated earlier, sniffing the network is the first step in the enumeration phase of attacks, which is used to reveal weaknesses in the network itself. 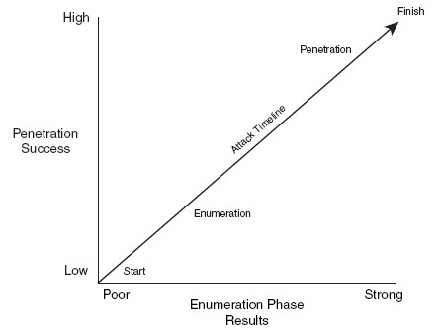 Now that we have established that enumeration is a very critical step in an attack, the problems with clear-text communication leaking an abundance of sensitive information should be understood. The next question to address is exactly what sensitive information in the Fibre Channel frame can actually be used in a possible attack? The following list describes several of the items that an unauthorized user can enumerate from a node connected to the SAN. Each of these entities gives ammunition to attackers to complete a successful attack:

The enumeration of a Fibre Channel SAN does not equate into data compromise, but it does significantly help the process. As an attacker tries to gain enough information to perform an attack, he or she will need to enumerate the target before any attack can be executed. Conversely, not all enumeration is negative. An organization may send clear- text information over the network that is not considered to be sensitive; such as Exchange IDs from Fibre Channel frames. The proper exercise of data classification should be conducted, as discussed in Chapter 1, "Introduction to Storage Security," to determine what type of data that traverses the network is consider public or private.