A lot of people don't realize that there are a number of ActiveX controls built into IE6. Although these built-in controls are not malicious in and of themselves, they are frequently used as components in malware attacks.

In Internet Explorer 7, Microsoft disabled almost all of the built in ActiveX controls by default. If a Web site needs to use a control, Microsoft notifies the user through the information bar and has the option of enabling the control. 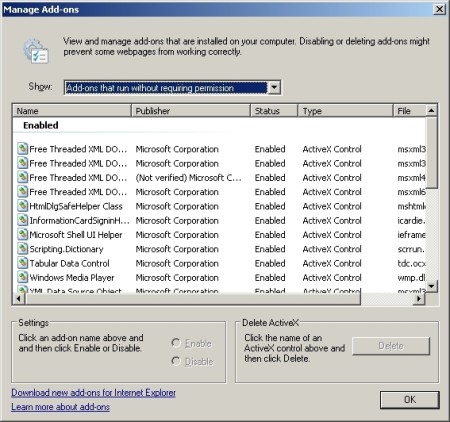 Another minor, but security-oriented change to the IE user interface is that all browser windows now contain an address bar. This helps prevent malicious pop-up windows from appearing to be part of a legitimate Web site.

These forms of protection are built in to IE7 and are non-configurable.

One last non-configurable, behind the scenes security feature that I want to talk about is cross-domain barriers. In order to prevent malicious code from taking advantage of holes in poorly coded legitimate Web sites, IE7 and its cross-domain protection feature prevents scripts on a Web site from interacting with sites located at other domains.

Security features on the Windows Vista version of IE7

About the author
Brien M. Posey, MCSE, is a Microsoft Most Valuable Professional for his work with Windows 2000 Server and IIS. Brien has served as the CIO for a nationwide chain of hospitals and was once in charge of IT security for Fort Knox. As a freelance technical writer he has written for Microsoft, TechTarget, CNET, ZDNet, MSD2D, Relevant Technologies and other technology companies.

This tip originally appeared on SearchWindowsSecurity.com.